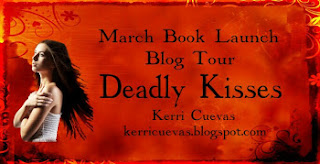 Aiden, tell me, what did you want out of life before you became a grim reaper?
I had every intention to bring my band into stardom. We played every Friday night as the cover band for Mad Dogs, and I was a month away from getting our own gig playing my original music.

That's really too bad about losing your band. Maybe old Abe would let you start a reaper band? So, what's the thing you hate the most about your new job?
When a person on my assignment list sees me and runs. I’m a guitarist not a track star. But seriously, I don’t mind reaping. Nobody gives us Grim Reapers the credit we deserve. We’re doing the world a favor by transporting souls safely to their afterlife. Abe if you’re reading this, I want the weekend off.

What do you miss the most about being alive?
I would die to eat a hamburger and French fries right now. I probably shouldn’t have said the word die. It sounds weird coming from a Grim Reaper. Anyways, I’d do anything to play my music again. And Bee—my heart aches every single second of the day...if I could only hold her one last time.

Hamburgers, eh? Well what do you know. Tell me, what's the one thing you have always wanted to do but didn't/couldn't/wouldn't other than take your band all the way? What would happen if you did do it?
This may sound weird, but I always wanted to get a dog. It was impossible when I was alive, and even more far-fetched now that I’m dead. The dogs here are called death dogs, and more vicious than a rabid wolf. I was attacked once, and this will make me sound like a baby, but I’m scared to death of them. Crud, I just said death.

They sound horrible. Is that what you are the most afraid of?
No, my greatest fear is losing my regret, and going to Heaven only to be rejected.

Rejection on that level would be awful. Let's end on a more positive note. What is it about Bee that you love?
Everything! Ok, I’ll give you the details. She’s different than most girls. She doesn’t want a car, she wants a motorcycle. She never judged me because of where I lived. We like the same music, and she’s real pretty. She has the purest heart of anyone I’ve ever known. I only wish, I would’ve told her all of that.

Kerri, who would you cast to play Aiden?
Evan Peters from American Horror Story

Thanks for having me here today Charity. Make sure to sign up for the ultimate swag giveaway. Good luck! 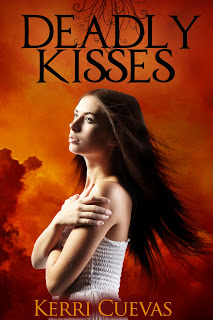 Book summary:
Aiden Grant is seventeen, has a killer kiss, and a boss who used to be President, back in the old days. You see, Aiden is a grim reaper and his kiss welcomes the newly dead. But Aiden’s pleasant grim reaper lifestyle is in jeopardy. And it’s not only because Honest Abe keeps throwing out history lessons with reaping assignments, just to confuse him. It’s because Aiden’s next assignment is to reap the soul of Bee, the only girl he has ever loved.

When Aiden’s kiss of death fails, intertwining their souls, Bee is still very much alive and they are both in trouble. The ancients want Bee, who has special powers of her own, and they’ll do anything to get her.

Some rules are meant to be broken—even if that means Aiden must bargain with his own soul to save Bee. Who knew the afterlife could get so complicated? 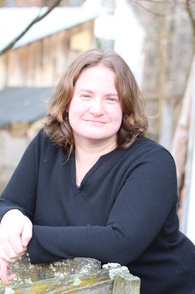 Kerri Cuevas was born and raised in Rhode Island. She moved to New Hampshire with her husband, three kids, cats and a rabbit named Hercules in 2005. When she's not writing, she's chasing chickens on her small farm or searching for the ultimate mac-a-cheese recipe.

Kerri went to college for Early Childhood Education but now writes books for young adults full-time. Her storytelling stems from watching too many horror flicks as a teen, but she no longer needs to sleep with the lights on.

Head over today for special posts, videos, deleted scenes, first looks, and freebies. Be my first patron for $3 or more a month and get one of my audiobooks for FREE. The first 10 patrons will get a free ebook.
This is the best time to get on board, because YOU get to shape my page. Your patronage will help pay for editing, cover art, and audiobook narration as well as the yearly costs of being an author--webpage, domain, and general marketing costs.