During my sophomore year of college, I had an assignment to write a paper on my favorite poem of the semester. I decided to take a different approach and wrote a story to go with the poem. I chose The Listeners by Walter de la Mare. The poem fascinated me and I had so many questions after reading it. My goal with the paper was to answer one or two questions and raise more. After reading it, I think I could use it as a format for a historical fiction novel. What do you think?

I will post my writing in block prose and quote the poem so you can tell where the poem starts without interrupting the flow of the story. It is long, but considering I was eighteen years old at the time (yes, I graduated HS at 17), I think it shows promise. Here are some houses similar to what I imagined. 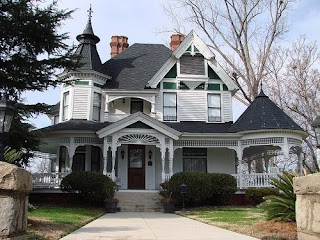 I love the turrets and detailed rails of this Victorian home. Just pretend the sidewalk is stone with a lush English garden on either side. 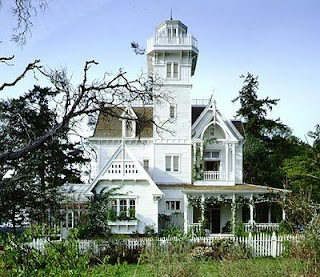 This is the house from Practical Magic, love the vines growing over it.
The Listeners
The night was cold and still. The only thing the man could hear was the sound of his heart beating deep within his chest and his breath in the frosty air. Inhale. Exhale. He knew she would not understand why he must leave. She was so delicate and sheltered. Her father protected her from the harsh realities of this world all her life, and now he was going to shatter her dreams by running away to war. No, she would not understand. She would beg him to stay. He prepared for her tears.

He could see the house rising out of the clearing. It was a large but simple house that charmed all who were privileged to attend parties there. There was a large courtyard for carriages to unload passengers onto a quaint stone walkway that went through the garden. This path led visitors to the front porch. The doors and shutters were oak, hand carved with ivy and roses and then stained a deep brown. There was one turret that rose up to the sky on the east side of the house. The man was close enough to see the ivy vines that wandered over the stones of the turret. In the summer, the vines appeared to be a green stairway to heaven. Would he ever see them rising into the sun again? He hoped so.

As he rode into the courtyard, a servant came to take his horse.

“Good  evening, Sire. M’Lady is not expecting you, but I’m sure she will be pleased by your arrival.”

“I fear not, old chap. It is unpleasant business that brings me here tonight. Tomorrow I leave for the war and she doesn’t know about it yet.”

“Tis a sad affair, indeed. Maybe this war will be short and you can return to us soon. You will be greatly missed by all of us. You have been a friend, even to the servants.”

The man smiled and tipped his hat at the stableman and walked toward the house as he said, “Thank you, George. I hope to see you as soon as the war is over.”

He turned and walked down the stone walkway remembering how the garden looked in the spring and summer. He would hold these memories close to his heart when the realities of war became too much. The man shook his head as if trying to forget the war that was taking him away from this happiness. As he ascended the stairs he thought it cruel that the moon danced across the door. The house looked so peaceful, how could he disturb its calmness? He knocked, quietly at first and then louder. Soon one of the housemaids opened the door and smiled in delight.

“Sire! What a pleasant surprise. Come in out of the cold, while I get M’Lady.”

He watched as she walked down the hallway and up the stairs to the upper rooms. Sarah was a gem of a housemaid; she was growing old, but her plump form comforted everyone in the house. Breathing deeply he let the warmth of the house comfort him; everything here held his love’s beauty. There was a small table to his left sitting beneath a gilded mirror holding a vase of yellow and purple flowers.

The sound of his love’s footfalls beckoned to him from the staircase. There she stood, one perfect rose petal, delicately strong. Her hair was half up in a bun, while the rest cascaded down her neck, spilling over her shoulders onto her white breast. She was surrounded by a light which had its birthplace in her smile. She glided down the stairs, and he walked to meet her, longing for a time without war. Reaching for her hand, he lovingly introduced it to his lips. Her smile broke his heart as he thought of why he had come, and yet her eyes held concern and knowledge that only a woman’s intuition could reveal.

“I was surprised when Sarah told me you had come. Has something happened?” Her voice was soft and concerned.

“Rebecca, I fear that I come to you with bad news. Let us go sit by the fire in the parlor while I collect my wits.”

“Of course, my love, you must be chilled to the bone.”

Offering his arm, they walked into the parlor at the end of the hall, which was lit by a chandelier hanging from the center of the high ceiling. There were a few high-back cushioned chairs and two love settees in the middle of the room. They sat down on the settee closest to the fireplace.

“Geoffrey, please tell me what has happened. I can tell by the look on your face it must be something awful.”

“Rebecca, sweet, Rebecca. If only I didn’t have to hurt you by telling. But I must, so please forgive me. I leave tomorrow to fight in the war.” Relief and anguish took control of him at the same time. Relief he had been strong enough to speak and anguish at the tears that gathered in his love’s eyes.

“Geoffrey, please don’t go. What will I do without you?”

“My love, I must go. If I don’t I will be labeled a traitor to our country, and then I could never give you the life you deserve.”

“Then give me your word that you will live and return to me as soon as it is possible.”

“I give you my word. As soon as I can I will return to you and we will be married. I must go now.”

He kissed her and stood to leave, walking quickly down the hall and out the front door so he would not see her tears. George had his horse waiting for him in the courtyard. After saying goodbye, Geoffrey rode away without looking back because it was easier that way. He did not know that it would be twenty years before he could return to fulfill his promise.

When he did return, he found the house deserted and in shambles. He walked down the stone path to the door, and his heart cried when he saw that the moon still danced across the faded door.


Is there anybody there?” said the Traveller,
Knocking on the moonlit door;
And his horse in the silence champed the grasses
Of the forest’s ferny floor:
And a bird flew up out of the turret,
Above the Traveller’s head:
And he smote upon the door again a second time;
“Is there anybody there?” he said.
But no one descended to the Traveller;
No head from the leaf-fringed sill
Leaned over and looked into his gray eyes,
Where he stood perplexed and still.
But only a host of phantom listeners
That dwelt in the lone house then
Stood listening in the quiet of the moonlight
To that voice from the world of men:
Stood thronging the faint moonbeams on the dark stair
That goes down to the empty hall,
Hearkening in an air stirred and shaken
By the lonely Traveller’s call.
And he felt in his heart their strangeness,
Their stillness answering his cry,
While his horse moved, cropping the dark turf,
‘Neath the starred and leafy sky;
For he suddenly smote on the door, even
Louder, and lifted his head:
“Tell them I came, and no one answered,
That I kept my word,” he said.
Never the least stir made the listeners,
Though every word he spake
Fell echoing through the shadowiness of the still house
From the one man left awake:
Ay, they heard his food upon the stirrup,
And the sound of iron on stone,
And how the silence surged softly backward,
When the plunging hoof were gone.
--Walter de la Mare

Disclaimer:
I have been spending more time blogging this week than revising, so I'm taking the rest of the blogging week off--I will try anyway. I'll concentrate on my goals for the week and see you again on Sunday! When I return, I have some blog awards to address.
Please post comments though, because I love reading them.
Posted by Charity Bradford at 11:35 AM