If you've ever bounced around in any forum, you've come across this question. I've seen it many times and my answer as always been the same. Both. Well, now I'm going to own up to what side I'm really on. And, just so you know, it just hit me that I am on one side more than the other.

First, I've always enjoyed both franchises. The worlds are well crafted, easily immersed in, and the characters are believable and endearing. Even the villains. I have probably read an equal amount of novels written about both worlds, watched all the movies multiple times, and there are two Star Wars blankets living in my house. One of them is at least 30 years old. (long story, I'll save for another time.)

However, I was watching a particular movie the other day with my hubby and something hit me up side the head, so here we are.

Star Trek rocks my world.
Here's how I know and what I loved about this movie in particular:

1. I've seen this movie five or six times and I cry within the first four minutes--every time! Maybe it's because I've delivered four babies of my own, but watching a child come into the world while his father leaves it kills me. Sacrifice for the greater good in its truest form. 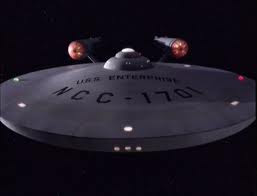 2. I teared (is that spelled right?) up the first time the camera panned over the hull to reveal the NCC-1701. (Yeah, I know!) I think the Millennium Falcon is awesome, but it's never made me cry.


3. My heart swelled with pride when the Enterprise rose out of the gas surrounding Titan. Inside I was yelling, "Oh yeah, now you're in for it!"

4. When Spock turned down the invitation to the Vulcan Science Academy I was smuggly thrilled. I always wanted him to embrace his human side all through the other series, and this was exactly what I wanted.

5. Bones--Have you read this book? It's one of my all time favorites. McCoy returns to a planet of assassins from his younger days to confront some old personal demons. How can you not love a paranoid space doctor?

6. When Scotty says, "I love this ship! It's so exciting!" I totally agreed. And then he gets to say his famous lines, "I'm giving it all she's got!"
7. When Kirk meets the older Spock in the cave and Spock says, "I have been and always will be your friend." Aaahhh! That brought back so many dear Star Trek memories.

There were so many more moments, but I don't want to bore you. Believe it or not, I have a reason for bringing all this up related to writing. There have been a lot of posts lately on how it has all been done before. How are we going to write something new and fresh so we can be published?

This movie is prime example that it can be done. I grew up watching Star Trek reruns. Then Next Generation came out and I would plan my whole night schedule around that show. DS9 saw less of me--I didn't like being stuck on a station most of the time I guess. Voyager pulled me back in for a season, but then I married a man who doesn't like science fiction. (I KNOW! He has humored me and accompanied me to every Star Trek movie that came out after our marriage.)

Anyway, Star Trek has a dedicated fan base. We know that world inside out. We know how all the characters relate to each other, what they contributed to their "time" if you will and you don't mess with that. However, this new movie takes all the old characters we love, thows away a lot of history and gives them a new future. The characters have enough of their familiar quirks and traits that we immediately feel comfortable with them, but because of the disruption of the time line we can accept the changes that take place. The old fans are happy with all the inside nods to the lost history, and new fans are brought on board for a new relevant and exciting beginning.

Brilliant. That's what it is. The Star Trek franchise just set themselves up for a bright future indeed. That is what we have to do with our plots. Yes, dorky boy meets girl, falls in love with girl, but girl is in a relationship with the quarterback has been done a kazillion times. Does that mean you can't do it again and have a successful book? No. It will just take a lot of hard work and some really great twists.

Aliens come to destroy the planet. Done before? Oh yeah. So, how are you going to make it feel new? The reader  needs to be kept on their toes and not feel like the same ending is coming. What if the aliens win? (Thinking the Host here.) What next? I don't have the answers for you. But, I believe that we CAN write the same themes that have been done over and over and make them ours. Remember, it's true that no one can write YOUR book.
Posted by Charity Bradford at 3:44 AM