First, in the last seven days, I've made three cakes. They've kind of been last minute, and I think a bit lack-luster.

So, what about that weekend epiphany?

It seems my emotional well being has been more of a roller coaster lately than normal. This could be due to living on an average of four hours of sleep, or it could just be that it's time to re-evaluate my life.

There are two desires in my life that are at odds with one another. The writing dream and my family. For the last three years, I've struggled to find that balance to keep both sides happy. And failed miserably. It seems I must sacrifice one for the other, but I know it doesn't have to be that way.

I thought about the posts I've written lately about not quitting. Then I realized something. Maybe it's time to tweak the dream.

I'd already decided that one day I would be willing to go the small publisher route. But I wanted to exhaust my agent list first. This weekend I realized that in order to keep my family in tact (and happier than it is now), I needed to move this writing thing along.

My agent querying is even slower than the publishing world. I've only queried 23 agents over the course of a year. I know a lot of people do that in a month. I don't know why I'm so slow. Perhaps it's the underlying fear of actually succeeding? Or the fear that I'm just not ready--for whatever reason.

But I am ready. And this weekend I realized, I don't care how it happens. I just want my book out there so other people can enjoy it. 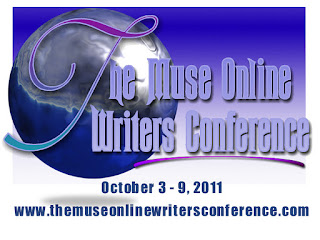 This week I'm attending the Muse Online Writer's Conference and pitching to one agent and three publishers. If one of them says yes, and their vision fits with mine, I'm going to say yes. I know there will still be a lot of work before the actual release date, but at least things will be moving forward again. I also have three agent queries ready to go. I might send them too, since I've already done the work. I dunno know though. My heart just isn't in it this week. (Update: I think its because when I pitch I make a much better impression than I do in my queries. With one pitch down, I have a request for a full. I guess I answer questions in a way that gets people excited about Sendek. Now if only they would see that in the MS...)

It might be the wrong decision, but for the first time in a long time, I feel at peace. At least I decided something.

What do you think? Should I stick it out, or go with a small publisher? Say anything you want, this is a free blog and you won't hurt my feelings. :) I also know several of you are with small publishers. Please share your favorite thing about going this route.
Posted by Charity Bradford at 3:29 AM