Q is for Quest 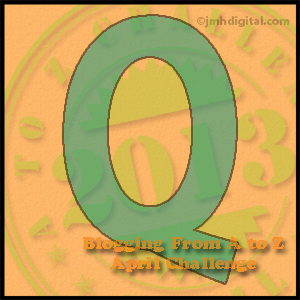 Talia's story is in effect several smaller quests leading her on the greatest quest of her life. I believe this is what really gives The Magic Wakes it's natural slant toward fantasy. There will be more science in the fiction as the series continues, but then it will take a decidedly high fantasy turn as well.

Because that's where the quest leads. The quest in book one isn't obvious. It's more of a series of small quests: find answers, find a certain Tree Elder, find a dragon, find the strength to do what you must. That kind of thing. No where near a traditional hero quest. However, the end of The Magic Wakes leaves Talia and her world with a problem. One that needs solving and quick before things deteriorate into civil war. This leads to her second quest and what she thinks is THE quest. How to blend magic and science peacefully on her world.

This is the quest that sets book two into motion and the consequences of this journey will lead her to the ultimate quest. I never really thought of my plotting as quests building on quests, but there it is.

What are some of your favorite character quests?