Last Friday I had cake day. A friend has twin girls and they wanted a Thing 1 and Thing 2 birthday cake. Now my mind immediately went to a topsy turvy design. I mean, come on it's Dr. Sueuss! However, I didn't have the time or all the right supplies. Plus my friend said she wanted it simple. And for those of you who know I can't draw, I traced this on wax paper and then did a "toothpick" transfer. ;) 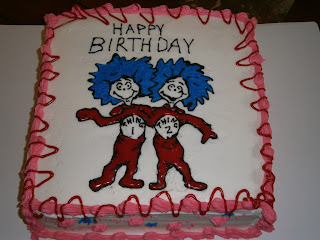 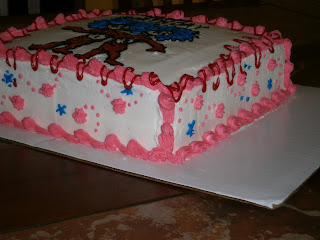 My own Thing 1:
I crossed the 10k mark with Last Christmas. There are still scenes in my head so I'll keep moving forward. Right now it's really weak in spots but it's first draft so that's fine. Here's a sneak peak at some first draft stuff. Q4U: Is her reasoning for not going further weak?

Most of the office lights had been turned off in an effort to set the holiday mood. Strands of light filled garland hung from the tops of the cubicles giving the area a soft glow. A large Christmas tree stood at the head of the conference table, its reflection twinkling in the large windows behind it. Katrina’s co-workers mingled everywhere, but she was oblivious. All she could focus on was Austin McCurdy.

They danced in the dimmest part of the room they could find. Katrina rested her cheek on his shoulder and lost herself in his warmth. His hands trailed slowly down her side, skimming the edge of her breast on their way to her hips sending shockwaves through her. She tightened her grip on his shoulders and pressed herself closer.

“Austin,” she whispered, “You make it hard to be good.”

“You’ve been good all year, and technically my job here is done.” He moved his hands into her long blond hair and tilted her head towards him. “I love your hair down like this.”

He took a few steps backward, drawing her with him until they were inside a cubicle. The next thing she knew, Katrina was sitting on his lap at someone else’s desk. Part of her wanted to laugh at the absurdity of office love, but when she looked into Austin’s eyes all she could think about was giving in. Giving in to what he wanted. What she wanted even more.

She leaned in and he met her half way. His lips were gentle, tentative, as if he were waiting for her to pull away. And then his arms pulled her closer and his tongue skimmed her mouth, looking for a way in.

“Austin—” She pulled back and caressed his face. “I need to go or this is going to get out of hand really fast.”

Katrina placed a finger over his mouth to stop him, “One week Mr. McCurdy. In a week your contract will officially be over and you’ll no longer work for Harper and Harper. And then I expect you to be on my doorstep.”

“Are you sure I can’t take you home?” His fingers intertwined with hers.

“This is one promise to myself I intend to keep. No office entanglements.”

“Then I’ll call you in time for New years. I’ll put off returning to Los Angeles just for you.”


And Thing 2:
I also started working on my "connecting" novella for the Sendek series. You  may recall that I decided to scrap Search for Knowledge a few weeks ago. For the most part I still feel good about that decision even though it puts me behind on getting the next book out in that story. However, it felt flat and a bit forced in lots of places. And no one wants to read that.

Ryce's story will answer a lot of the questions about these new mage and Talia's plan for them. And he's always been the planned antagonist for the 3rd planned book. I figured, let's just get to it! So my four books will turn into a real trilogy after all. It's a relief on so many levels.

And for those of you who've read the first book--Jaron's demon is coming back. ;)
Posted by Charity Bradford at 2:00 AM