Although I really enjoyed being with the autism class last week, today is a mixed bag of emotions. I'm home so I can write, YAY! However, I've got the creeping crud making me want to turn on the fireplace and hide in bed. Every time I sub with the boys I get something. Every time! This time it's just allergy stuff aggravated by a trip to Horses for Healing.

If I get sick every time, you may wonder why I love being there so much. Well, let me tell you about the sense of humor these five boys have. That and a renewed perspective on what I take for granted keep me returning.

First off, these five boys range from 11 to 13 years old, but many two year olds can communicate better and instinctively understand social cues better than these boys. I think that's why I get so excited over little things like a morning greeting by name. Meaning the boy walked down the hall, I said hello and he replied with "Hello Miss Charity." Simple things like this are huge!

All the boys have their moments, but they are sweet and so funny at times. They get fixated on things for awhile and then move on. Here are the current moods.

C likes to give me a kleenex and say, "blow nose please." I'll blow my nose while he grins super big. Then he'll hold his hand in front of his face in a cupped shape and say "hee hee hee!" He's also the reason I hear "Zero minutes please" every time someone asks me to do something I don't want to do. It's his way of saying yes and no at the same time.

E is a Casanova. He's so quiet that he used to slip off and disappear, but now he can walk himself to speech by himself! Earlier in the year I was walking him to speech and he was so happy, so excited that he stopped in the middle of the hall, reached for my head (which is level with his) and pulled me in for a kiss! I stopped him in time, but it was kind of funny. He just didn't know how else to show his joy.

H works all day long for the reward of playing the wii. His goal is nice words and inside voice. He used to say things like "Eat teacher" now it's "we don't kick, use good words". I can't think of a specific thing he's done recently that was funny, but once he told me I was funny. Wish I could remember what I did. 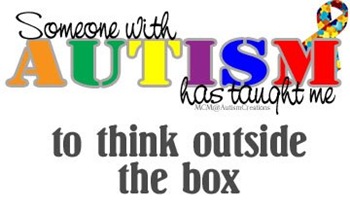 P doesn't speak a lot of English and that makes it doubly hard to understand him sometimes. A couple of weeks ago the music teacher showed a video in which he was wearing a wig. He's normally bald. P laughed the rest of the day and repeated the teachers name. I love that it doesn't take much to make them happy.

D is perhaps the hardest of all. He doesn't speak at all, but when he's happy he gets the biggest smile on his face.

I like working with them because the growth is apparent as they learn. Three of them can read fairly well and work basic math problems. We work on continuing those basic skills, but mostly we work on building social skills for interacting with the world. Things like making eye contact, remembering names, and replying to questions appropriately instead of just repeating the question.


Do you know anyone with autism? What do you love about them?
Posted by Charity Bradford at 9:57 AM