My husband started reading my book on Sunday. He doesn't really like to read so I'm glad he's giving it a try. It makes for nail-biting anxiety though. He's asking tons of really good questions that I'm refusing to answer because it will be a good opportunity to see if they're answered in the actual story. *fingers crossed*

One of the questions he asked is about Atua and the whole talking to him thread that runs through the book. He wondered if this is science fiction or religious. Well, it's kind of both. It can be both. Right? I didn't plan it that way, but well, it sort of turned out that way in the end.

It all started in chapter two when Am puts Eleena on an escape shuttle with her Uncle. She's going because Am promised to help her father travel to the other side of the planet to retrieve her mother and then somehow get them to where Eleena is going. Eventually. Things don't go as planned. 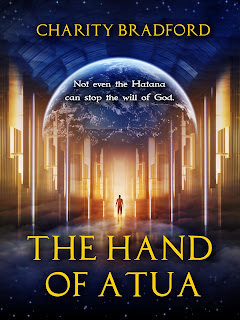 "No problem. Be safe." Am shrugged and turned to me. "Eleena, don't worry about anything. Evander will let me know where to bring your parents so you can be together."

The other man, Evander, stepped forward. "Am, we've intercepted communications from Rawiri. Your father sent an envoy ahead to collect you before the fleet arrives. It could be here any moment. You need to leave now."

"I'm not leaving Talrano." Am shook his head. "We'll take my ship to get his wife. We can do it by the end of the day, tomorrow at the latest."

"Am, don't be stupid. Your father wants you back. If you don't leave he’ll get what he wants. Send someone else for Talrano." Evander stood his ground.

Uncle pointed at the people surrounding us. "They know who your father is, and it won't take long for them to turn on you. If you go back, you won't make it off the planet. "

Am turned away. I waited and silently prayed he wouldn't break his word. He said he'd get my parents.

"What about Eleena? I promised her." Am's voice cracked. He coughed and stepped farther away from us.

"Eleena," Beck looked me in the eye. "One day this man will save planets from Hatana Anaru's wrath, but if he tries to reach your parents he will die here. Who will save those other people if that happens?"

A tear slid down Uncle's cheek. He knew Mima and Popi would be left behind. I looked at Am. Who was he that he could do this? I'd always looked at him as just another one of Popi's students, but the others acted like he was something more.

Now, his eyes pleaded with me as if everything were up to me. My parents or so many others? Who were they and how would he save them? I didn't know. I only cared about my family.

Atua, what do I do? I want him to get my parents, not save strangers. My eyes scanned the crowds of people. They were scared but grew angrier with each moment. They pushed closer and the soldiers now fought back. I didn't like them, not any of them.

A voice, softer than a whisper, touched my heart. But I love them. Let me save as many as I can. I will need him to do that.

The voice filled my entire body with warmth. With Atua's love for me. For my parents. For Am and everyone on Manawa. It was so full, I thought it might be for everyone in the universe.

Tears flowed down my cheeks, an extension of what filled me so completely. I wanted my parents, but I didn't want Am to die.

The reply was immediate. They are in my hands.

"It's okay." I launched myself at Am, hugging him tightly. "Peace on your path, Am, and may Atua be with you."

"Eleena?" He squeezed back, and when he spoke his voice sounded rough, like it struggled to pass his lips. "Atua willing, one day we'll find the light leading all of us home."

The sadness didn't go away, and the voice didn't speak again, but I felt peace. Mima would be proud of me for listening to Atua.

I let Am go. His eyes looked sad, and I wanted to tell him Atua would protect my parents, but my voice had frozen in my chest. Instead, I waved as Uncle Beck led me up the ramp into the ship.

Pre-order Kindle at a reduced price until February 3rd
Download Free Review Copy from Booksprout
Posted by Charity Bradford at 9:43 AM