Here is my interview with Landry. I've dreaded this because I didn't know him as well as I liked, and feared he was just a stock hero/love interest minor character. However, once I started the interview things went well and one question led to another. I finally just closed it because the post was getting so long. I learned a few things that I can work into the story to help deepen his character. I cringe a bit too because a whole subplot popped up in my mind that I'm not sure I want to take on at this late stage of the game. It would be a nice way to tie in one of my other subplots though. Need to let it percolate a bit.

Description from the novel (all from Talia's POV):


"The other man was in his prime, with jet-black hair and curiously light eyes."


"He stood taller than anyone else in the room and up close, I noticed his icy blue eyes. His smile made me feel he could read my innermost thoughts."


"Perfectly proportioned, built of lean muscles, his stance suggested a tightly wound core of strength waiting just beneath the calm exterior. Even though he did not wear the Royalist uniform, it was obvious he was as comfortable with command as the General behind him."


Commander Landry Sutton, thank you so much for joining us today. I know how busy you are, but we really appreciate you taking the time to meet with us. Can I call you Landry, great. Shall we jump right in? Yes, that would be great.

Explain how you are related to King Frederick. My mother was the King's sister, Ellyor.

So you grew up in the palace. How did things change when the Prince was born? Did you find that you received less attention? I was eight years old, so I remember when Stefan was born. It was a week after my own mother and baby sister died, and when the Queen died shortly afterward we just became family. My mother had prepared me for life with a new baby in the palace and I think I became his big brother because that is what I thought was expected of me.

You never had any problems with the young Prince? Never grew tired of him following you around? No, he was the only other kid in the palace so we stuck together. Sure he was younger, but he has a lot of grit and determination in him. I think he will surprise everyone now that he is King.

You seem like such an easy going man, but you chose to follow your father into the military. Why did you do that when you could have done anything you wanted? My father was a good man. He loved Algodova, believed in the goals of the monarchy and willingly gave his life to protect them. He shared that love with me. When he died, the King took care of me along with Stefan as if I was his son. The royal family is all that I have and I want to protect them the way my father did. For me, it is part of what it means to be a family. I'm good at what I do, I enjoy it, and it gives me pleasure to know it keeps my family safe.

Have you ever had to kill anyone? I mean, we've been at peace for years now. (Landry pauses, as if choosing his words carefully.) We are at peace, but there is a price to maintain peace. Let's leave it at that.

Is there anyone that you really hate? (Another pause as Landry's eyes narrow and turn icy.) There is only one man I think I've ever really hated. The man responsible for my father's death.

Do you know who that is? Yes.

Will you tell us? No, I don't want him to know I'm coming for him. Not yet anyway. Let's move on.

Landry, people have been saying that a certain scientist has caught your eye. Is this true? Yes.

We are all very curious about Ms Shannon. Mostly, people want to know what about her drew you in. I met Ms Shannon when she first came to Joharadin and found her rather shocking. (The interviewer has been fidgeting the whole time.) What I really want to know is, how did you get past her eyes? (Landry forces a smile as he feels the the interviewer's revulsion move through him. He puts up his mental wall so as not to "read" her emotions for the rest of the interview.) Her eyes were the first thing that I noticed, but I saw something different than you. Eyes are the windows to our souls, and hers are very deep.

Were you attracted to her immediately? I tried to convince myself that I wasn't, but she is so unique that subconsciously I wanted to know everything about her from the moment she walked into the room. When she didn't respond to me the way most women do, I felt challenged. Later, it was something else entirely.

Ooo, I'll come back to that, but first, I heard you actually accused her of treason to the crown. (Landry sighs) Unfortunately, that is true. I knew she was hiding something big. I think I wanted her to be working for the Dragnot because then there would be no chance of a relationship between us. Taking care of the royal family has always been my life, and I didn't want to be compromised by splitting my attention in that way. Now, I'm glad I was wrong.

So, when did you know you were in love with her? The first time I touched her.

Care to elaborate? Not really. But let's just say our magical qualities sparked a chain reaction that neither of us were prepared for.

You're killing me. Please kiss and tell! It wasn't a kiss, that came later. When we touched that first time, a bridge connected our minds. We could hear each others thoughts, share the emotions. I knew in that moment she was not the traitor I looked for. Instead, I felt the echos of my loneliness within her. We share similar experiences and it was a relief to know someone understood why I make the choices that I do. And then, there was the need so deeply hidden that she wasn't even aware of it. It consumed me and I knew I had to answer her call. But first I had to learn how to build a barrier between us.

Why was that necessary? I don't understand why it would be a problem to always know the motivations of the person you love. Seems like that would cut out all the misunderstanding and the hurt that comes from it. Obviously you've never shared your mind with anyone. Look at it this way, if you knew everything about a person, why would you need to talk to them, spend time with them? You would lose interest because there would be nothing to engage your mind, keep you wondering. And wouldn't you want to have the choice of what you share with them?

I guess I didn't think about that. Alright, I know you are short on time, but can I ask one more question? Did you really see a dragon? Yes, Talia and I woke a dragon in the Acaran Mountains. Don't worry, the dragon has now joined her kind on another planet. It's too bad, we could have learned so much from her. Now, if you don't mind, Talia is waiting. The first meeting of the new society of mages is meeting in an hour and I need to be there.

Of course, thank you so much for your time. 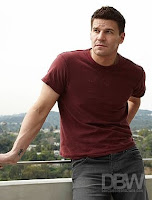 When I picture Landry in my mind, he is somewhere between David Boreanaz (left) and Chris Pine (right). David carries himself the way I imagine Landry. Confident, a little cocky, does his job with precision and brute force when needed, but still a good guy. My favorite picture of Chris Pine can be found HERE. I love the stubble, the smile and his eyes are really light in this picture. It would be a real toss up between these two if they both agreed to do a movie of my book.

DISCLAIMER: If I was a teen girl these are the guys I'd have on my wall, beside a picture of my hubby of course. Then, if I was a teen girl I wouldn't have a hubby...but, when I WAS a teen girl I had pictures of heartthrobs and a picture of my hubby as well. So, if my hubby reads this I'm safe. I did marry him and not *left blank out of embarrassment that I ever thought he was good looking*. Seriously, the only guy I haven't changed my mind about is my hubby, he keeps getting better every year, and I've known him since we were twelve.

Theme song? I have not found THE SONG yet. Maybe it hasn't been written. He sort of shares Talia's song If No One Will Listen. When I hear that song I think of Talia, but technically he would be the one talking to her. Another song that is just a bit more his personality would be Save You, also by Kelly Clarkson (Yes, she is still MY American Idol.)

Posted by Charity Bradford at 9:26 PM