Thank you Anne Riley for hosting this Murder Blogfest! Head over to her site to follow the links to all the posts.

Are you prepared for an insanely long post? There are two murder scenes here, completely unrelated. I would love your thoughts and nit pickiest critiques if you have the time. Thanks!

First, thank you to Mia and Laura for critiquing the first one for me. It really helped me fine tune it just a bit more before posting. Second, because of the critiques and questions they asked, I decided I need to post a little background before the scene.

This story is still an idea in the back of my mind--fuzzy and incomplete. Sean and Elyzbeth get engaged, but before they tell anyone or make plans, war comes to their country (I don't know where this is yet). Elyzbeth flees for her home and Sean goes to fight. The next two years are full of (insert conflict, action, blah blah blah) and both believe the other to be dead. Sean searches for Elyzbeth but can not find her because her family is hiding her. Why? All the conflict above--renegade soldiers who use the war as a cover to commit horrible crimes. Sean finds Elyzbeth days before this scene takes place, and tells her about the death of her brother and best friend. It's brutal and ugly so I'm not posting it here (who knew I had such darkness in me? Not me, and I'm not ready to show my friends yet.)

Anyway, Greg is the leader of those renegades and Sean and Elyzbeth both know it. He is alone in this scene because his men have become careless and been captured. He also wants a personal revenge of sorts on Sean (reasons to be figured out later?). This scene would be near the end of the book so the reader will know the history that is implied and the actual motivations of each character--once I figure out what they are. LOL.

The late afternoon sunlight filtered through the leaves, falling softly into the small clearing. Sean sat close to Elyzbeth on the picnic blanket, content to be with her after so many years apart. His senses filled with the sound of her voice and the soft feel of her hand in his. The blow to his head caught him by surprise.

When his eyes opened, Sean stared at the tree in front of him. He lay on the picnic blanket with his hands tied tightly behind his back. Where was Elyzbeth? He heard her cry out behind him and the sound of her footsteps as she ran away through the trees. A paring knife stuck out from the edge of the blanket, and Sean rolled over hoping to reach it. Now he faced the direction of the sounds, and he watched the woods as he felt along the ground for the knife. A man dressed in army fatigues, dragged Elyzbeth out of the woods and into the clearing. Greg. Loathing shot through Sean’s body followed by a tremor of fear. Greg touching Elyzbeth. Greg’s eyes met Sean’s.

“Didn’t think you would be out long. Good thing I was always better at knots.” Greg held Elyzbeth tightly as she struggled against him and smirked.

“I want you to watch.” Greg wrapped his arms around Elyzbeth, pulling her closer and burying his face in her hair, exaggerating every movement he made.

Elyzbeth jerked away and threw her head back, hitting Greg in the face. He let her go long enough to check his nose, but smiled as he chased her out of Sean's line of sight. Sean pulled at the ropes but they didn’t budge. He stretched his arms back as far as he could, searching once more for the knife; he couldn’t reach it. Frustration built as he listened to Greg taunting Elyzbeth and heard her screams as he caught her once more.

Greg carried Elyzbeth back into view, slung over his shoulder, legs kicking and fists beating against his back. Sean noticed that her pants were ripped and his fear turned to a burning rage. Greg threw her down onto the blanket in front of Sean, knocking the breath out of her. Leaves and twigs littered her hair and a scratch dripped blood across her cheek.

“If you touch her,” Sean’s voice choked on the hatred he felt.

Elyzbeth’s eyes met his as she gasped for air and Sean willed her to keep fighting. They both knew what Greg was capable of. The moment lasted only a second before Greg laughed and knelt beside Elyzbeth. He jerked her up and turned her towards him.

“How did we miss such a pretty thing?” Greg pulled her close, but Elyzbeth leaned away and swung her legs in front of her, keeping her knees between them. She spit in his face, but Greg did not let go again. He kept one hand on her wrist and slapped her with the other. Sean watched a trickle of blood appear in the corner of Elyzbeth’s mouth as her head reeled back from the force of the blow. Her eyes rolled back in her head and her body went limp.

His muscles strained against the ropes, they felt looser than a minute ago, but he needed the knife. Ignoring the pain in his shoulders, Sean stretched until his fingers brushed against something hard and smooth. He pushed his body back until he had the knife in his grasp and moved it into position to cut at his bindings, nicking his palm in the process. As he pulled and sawed at the ropes, they cut deeper into his wrists. His fingers cramped, but Elyzbeth needed him.

Greg now straddled Elyzbeth, but she was conscious again, and fighting as hard as she could. Her blouse was ripped; her hair wild, but all Sean saw was Greg’s hands on her soft skin. Each one of her cries fueled his desperation. Anger consumed Sean and he tried not to remember all the other women Greg and his men tortured and left for dead.

The knife broke through the last strands of the rope and Sean launched himself at Greg, forgetting about his gun in the picnic basket. Catching Greg around the waist, Sean pushed him off Elyzbeth, plunging the knife into his arm. The knife was too short to cause major damage, but it inflicted enough pain to slow Greg’s response. Sean felt his legs kick Elyzbeth as he sought for better leverage and heard her gasp in pain. He poured his fury at causing her pain into his punches. Blow after blow carried the fury of the last two years and the memory of each person who suffered at Greg’s hands.
Sean’s powerful punches reduced Greg to a bloodied mass of pain in a few minutes. When Greg lay still, Sean’s training resurfaced and he forced his hands to be still.

“Elyzbeth, are you alright?” Sean turned to find her huddled at the far end of the blanket watching, eye wide. “Pass me the rope.”

Sean’s hands trembled as he tied Greg’s hands. He didn’t think Greg would regain consciousness soon or be able to fight if he did, but no point in taking chances. Greg surprised him once today and that was enough. Elyzbeth trembled beside him. When there was no chance of Greg escaping, Sean stood and took her in his arms.

“Elyzbeth, we’ve caught him. Now he will pay for everything.” He murmured into her hair and held her until she stopped shaking and his heart beat returned to normal. He almost lost her after searching so long to find her.

“Elyzbeth, I need to call the base. Will you be alright for a minute?” Sean looked down at her face. He expected tears, but found only a dazed look in her eyes that tugged at his heart. “Beth.”

She shuddered but her eyes focused on him. “I’ll be fine. Make your call.”

Sean reluctantly let her go and retrieved the phone from the blanket. As he dialed the base, he watched Elyzbeth walk over to Greg.

“This is for Tracy, and my brother.” The gunshot rang through the clearing. Birds, startled by the sound, flew out of the trees. Elyzbeth stood still, tears streaming down her face with Sean’s gun in her hands. A pool of blood spread from Greg’s shattered skull.

And, since my hubby thought that was just like all the shows on TV and therefore predictable, I give you a second tasting of death. Thank you Virginia Woolf for influencing this scene. 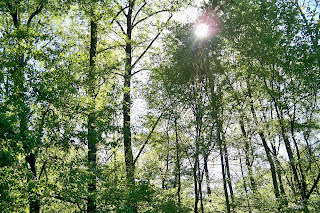 She lounged in a chair on the back deck with her feet propped up on a second chair. Sunlight filtered through the leaves, shimmering before my eyes, veiling the world in spring green. I watched her silently, my breathing masked by the twittering birds, as she lowered her eyes to the notebook. Peaceful, so peaceful. The sunlight brought out the auburn highlights in her otherwise plain brown hair.

Hatred boiled in my veins. How could she look so innocent? How many times had she bound and gagged me? Shoved me into the corner of the closet and walked away laughing? Relegated to second place in this family, I decided to change the status quo she worked so hard to establish.

I took a cautious step out of the shadowy doorway. My eyes teared up as I blinked in the bright afternoon light. I trembled. What if she saw me coming? I clenched the knife tighter and waited for my eyes to adjust. She ignored me as completely as she ignored the children and the chores. She only thought of the pen moving across the blank page.

My fingers tingled, wrapped around the handle of my best knife. I pulled on every ounce of strength within me to raise my arm. I needed to do this to save my family. As my shadow fell across her page, she turned wide eyes toward me. Perfect. The slight twist of her body placed her in the perfect position.

I plunged my hand down, the knife gliding into her chest easier than I expected, stopping only when my skin felt the fabric of her shirt. Her mouth opened and a small gasp escaped as she stared up at me. She frowned and her brow furrowed. As I wondered if I needed to stab her again, her face fell slack. The vacant expression confirmed she no longer occupied her body. I waited another moment, just to be sure.

I slid the knife out and wiped it on my apron. It felt too easy. She might return to haunt me, but until then every moment belonged to me. I took a deep breath and walked in front of her. I stared into her glassy eyes and concentrated all my energy into one thought. Possession.

The edges of my vision blurred until the blue orbs staring back at me rushed toward me. Blinking, I looked up into the trees and the soft light bouncing off the leaves as they turned in the breeze.  My fingers brushed the pages of a notebook sitting in my lap. I looked at the words on the page, but they didn’t mean anything to me. A single drop of blood soaked into the page. I wiped it away, and started a grocery list. 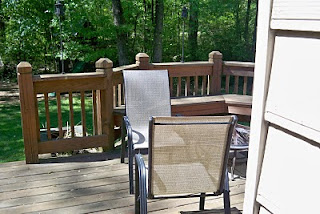 My lovely backyard, taken April 9th. Are you jealous of my lush greenery? I sit here and write with a pen and notebook, a lot.
Posted by Charity Bradford at 11:13 PM