I missed Misty's Show vs. Tell blogfest, but I really wanted to do it. So, I did it just for fun. I placed the photo between the telling and the showing versions. Here you go.

Note 1: Um, sorry, I really got into the scene in my head and it came out a bit long. I'm not in the running for her awesome prizes, but would love to hear your comments. (There's also a tribute to one of my favorite authors, David Gerrold. Did you catch it?)

Note 2: I wrote this straight into blogger so it's a first draft, but I'm really excited about it. I'm thinking of expanding the idea to a three part short story. Kind of a past, present and future three segment thing. This would be the present.

By the afternoon, the Allied forces were dumping everything we had on top of them. They sent me to the front line to make sure nothing walked out alive, because I'm the best. Conflicted, I prepared to do my job. Then the distress signal came in.

Someone on those ships knew my name. They called to me for help. And I went.

The angel waiting for me asked for my help, and I plead for her forgiveness as I scooped her into my arms. One look at my squad and I knew they had my back. Our lives became hers, and we would sacrifice everything to protect her.

But first we had to reach safety. 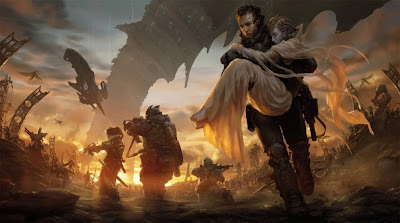 
"Briggs, get your squad out there. Anything moves, you shoot it. You got that?" The Commander barked in my face, spittle hitting my chin.

"Sir, yes Sir!" I turned and stepped out of the tent before allowing my brow to furrow. They should have tried to make contact first. I squared my shoulders and reminded myself it wasn't my decision to make.

Shaking it off, I gathered my men, and we slunk over the breach into the hot zone. We spread out, moving from one piece of wreckage to the next. After ten yards I knew we were under more danger from friendly fire than from the alien ships. They had given fierce battle earlier, but now nothing moved around us other than the flames or melting metal.

Sweat trickled down my neck as I called the men back to where I hunkered behind an abandoned tank. I brushed my face with my sleeve, the button scratching across my forehead. The smell of my sweat mingled with the heated asphalt and burning rubber.

"Chigger, you getting any readings?" The heat pressed into my chest making it hard to breathe.

Chigger didn't get a chance to answer before the radio beeped. "I thought we were on radio lockdown?" He frowned as he fumbled for the hand held unit hanging from his back. A click of the button and the static faded to a soft voice.

"Nathan Briggs, don't leave me here to die. I was returning to you."

"What the?" Chigger shook the walkie-talkie and looked at me. "Who's that Briggs?"

"I dunno. Hand it to me." I reached for the radio, held down the button and spoke slow and low. "Who is this?"

"One of them, but you know we meant you no harm. Remember, and come find me." The lilt of her voice stirred something inside of me. A phantasm from my past, a warm caress that sent longing through me, but it slipped from my mind before I could grab hold of it.

"Man, but she reminds me of someone. I just can't think who." Dingilliad whispered.

"Briggs, I say we check it out. If it's a trap we finish our directive." Chigger took the radio back and pushed it into his pack. He lifted his machine gun to chest level and grinned.

"All right, but use caution men."

We spread out again and I let my thoughts wander. Never a good thing in a war zone. I lost focus of the flames and wreckage. Lost track of my men. Her voice played in my mind and I tried to put a face with it.

I was returning to you.

I trotted past a bombed out car laying on its side and found all my men digging through more rubble. Their eyes blinking through the sweat and grit they stirred into the air, but at least this bit wasn't on fire.

Dingillian turned to me, tears streaming down his face. "I remember. I remember." He continued clawing at pieces of metal and concrete, digging into the side of a building.

"This isn't one of the alien ships." I rested a hand on Chigger's shoulder.

"No, the ships were trying to rescue them. We already had them locked away. Remember. She said to remember. Why can't you?"

"I don't know." I dropped my hand and he continued to help Dingillian.

My men pushed aside a large slab of wall, grunting and straining. When the dust cleared we looked down an elevator shaft. A very deep one and another memory flirted with my mind. Long flowing hair, pale blue eyes and wings.

I sucked in a gasp of air, all of my muscles clenching. Her name is Sedalia. And there are others. Four to be exact, and as I looked at my four men I understood their haste. They stood rubbing sore arms, heaving in great gulps of air for only a second before securing a rope for our descent.

By the time we reached the bottom of the shaft, I thought my arms would fall off. They pulsed and trembled uselessly by my side. How we were going to climb back up was a mystery, but it didn't matter. All that mattered was finding them. We didn't have to look far.

Just outside the shaft the war zone continued. Small fires cracked and popped over shattered computer circuitry. The smell of ozone burned our noses and we pulled our shirts up to cover our faces. A blinking red warning light illuminated the darkness in slow flashes, but it was enough to expose the bodies.

My men checked each one, moving away quickly from the humans on to the next form. I walked straight ahead, my stomach rolling with dread, toward a pale pink blur at the back wall. Her cream colored dress and wings stained from the light pulling me on, past the burning flesh of the others.

"Nathan. Do you remember? Will you help me?" Her breath washed over me and all the memories returned. My life before I was human. My life with her.

I scooped her frail body into my arms, pulling her close as I breathed in the soft scent of mountain breezes. "If you can forgive me, I can do anything. Even save us now."

She rested her head on my shoulder and sighed. "You're here, there's nothing left to forgive."

I turned and saw my men, each in his own world of pain. None of the others lived. One by one they stood and faced me. Their eyes like steel, their fists clenched tight. The humans had stripped them of their wings, and now their hearts. They would help me save Sedalia. And then I would help them get revenge.

Posted by Charity Bradford at 3:34 AM