This week I realized that I missed blogging about food. Blogging about writing has been a much more "successful" platform for me, but you know what? I still like food a lot. And since I've had very little time to write or even think about writing this week, I'm going to share a recipe with you.

We tried this for the first time last night. You'll notice that I almost never follow a recipe the way it's written, even on a first try. I can't help it. 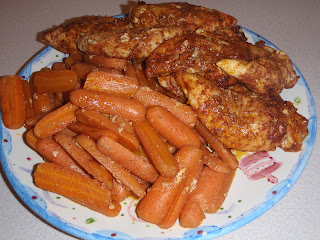 Ingredients:
5 tbsp EVOO (I hate when she calls it this. Is it really easier or save that much time? Olive oil, extra virgin if you so desire, but *shrugs*)
1 lemon, juiced (I used lemon juice out of a bottle because I forgot that I bought real lemons for this. *head smack*)
4 1/2 tsp chili powder
salt and pepper
1 1/2 lbs baby carrots, halved lengthwise
16 cloves garlic, unpeeled (my family would die even though I really wanted to try it because I love garlic--so I only used 5 cloves)
4 skin-on bone-in chicken breast halves (um, I thought the skin was supposed to be bad for you? I never buy this so I used what I had--frozen skinless chicken tenderloin)

1. In a small bowl, combine the olive oil, 2 tbsp lemon juice, 1/2 tsp chili powder and 1/2 tsp salt.
2. In a 9x13 baking pan, toss the carrots and 12 cloves of garlic with the 1/4 cup of the lemon-chili mixture. (As you can see, my garlic was so old that the papery covering fell off when I barely rubbed it, so I just chopped 3 of them up in chunks. I also dumped all of the mixture in the carrots because I didn't plan on using the extra for salad dressing.) Place the pan in a cold oven and heat to 400 degrees. 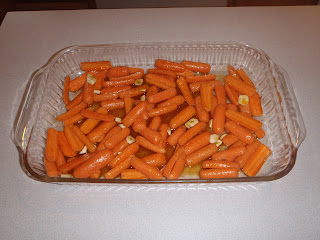 3. Peel and grate the remaining 4 cloves of garlic into a small bowl. (For some reason I don't have a grater. Weird as much as I cook. So I just minced it up really small with my favorite knife.) Stir in 2 tbsp. lemon juice and the remaining 4 tsp. chili powder. Rub this garlic-chili paste evenly onto the chicken flesh under the skin. (or just all over it if you have skinless chicken). Let sit until the oven and pan are preheated.

4. Season the chicken with salt and pepper (this just means sprinkle it). Place the chicken skin side up, over the vegetables in the baking pan. Roast until cooked through but still juicy, about 40 minutes. 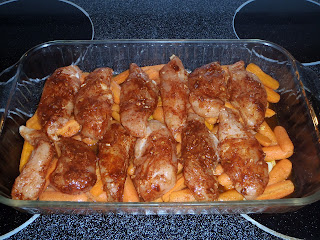 I have to say that I thought the house smelled wonderful, but my family must be half vampire because they freak out every time I cook with garlic. In the end only one out of four children tried the chicken. Hubby thought it was okay, but not as good as it smelled.

I thought it was a nice change from the same old same old we've been eating.
Posted by Charity Bradford at 3:00 AM