Plotting...Just in time for Nanowrimo

I started drafting the post about romance, but then it hit me--we are only 2 weeks away from the start of Nanowrimo! That's National Novel Writing Month for anyone new to the writing scene. 50,000 words in 30 days!

Last year I didn't get to play and I've been a bit "off" the entire year. Here's to getting back on the writing train. You see, my biggest problem with writing this year has been NOT allowing myself to write the crappy first drat. I wanted everything to be perfect that first time. It's like I forgot that NEVER happens. For anyone. Nano gives me that reason/excuse to get it done.

Here is a great quote that I'm going to post on my wall in front of my computer:


"I'm writing a first draft and reminding myself that I'm simply shoveling sand into a box so that later I can build castles." ~Shannon Hale

Become one with the sand!

Now, over the last two years, I've been adopting little plotting tips. It is helping my writing be more focused. I still consider myself a pantser, or the new term I've heard is Discovery Writer. Doesn't that sound great! And it doesn't come up as a misspelled word. :)

Janette Rallison taught a great class on plotting at the LDStorymakers Midwest Conference in September. Here are my notes from that class.

The first thing Janette said was rules exist for a reason. She followed that up with this quote:

"There are no rules to assure good writing, but there are rules to avoid bad writing."~Noah Lukeman

Writing requires you to have at least a slight idea what you want to write about. Even for Discovery Writers. Are you starting with a character (a scientist mage), a story idea (what if humans were created by aliens), or a theme (sometimes what you want most in life is not good for you).

The answer to this question will affect how you plot.

Character do's and don'ts
They must be likable but flawed. Leave room for growth.

Problem
Your characters MUST have a problem at the beginning of the story. It may not be the big problem, and it can be solved and replaced with a new one, but there must be some kind of problem. And, they must have a goal to solve that problem.


Antagonist
Every villain is the hero of his own story. The stronger the villain, the harder your hero has to work. It's good to remember that the antagonist is not always a villain. They just oppose the MC.


Consequence of failure
There must be a reason why the character doesn't just give up and go home.

Finally, we did an exercise to help us get the core plot of our novel down into 3 sentences . It was based on Dwight Swain's Equation (Techniques of the Selling Writer). You simply fill out this chart and then put it in sentence form.

Problem: The rapist is stalking her after escalating to murdering his victims
Character: Katrina in marketing, 8 months pregnant after being raped by the holiday serial rapist
Goal: Help the police catch the holiday serial
Antagonist/Obstacles: The holiday serial thinks fate has sent Katrina and their unborn child to replace the family he never had.
Consequence of Failure: more people will die, her child will be raised by the rapist and she will most likely die.

Then you put it into sentence form:


When a serial rapists starts killing his victims to leave messages for Katrina, the only victim to get pregnant, she agrees to help the police catch him in spite of her swelling belly. Can the police keep her and her unborn baby safe while using her as bait now that the rapist wants a family of his own?

And what does that look like? A pitch! I've not even written the book and I have a decent pitch ready to go. SO exciting!

The whole purpose of this is to help you stay focused while you write. For discovery writers this is invaluable. We can now avoid those wonderful side lines that we have to cut later because they didn't take us to the resolution of our goal.

I got so excited that I spent an hour doing this... 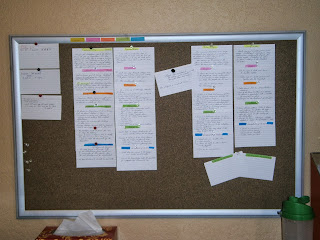 Each of the 5 categories got a color and an index card. I put the character first since I already had the story idea and characters. This is for two books, the two main characters. And I got detailed. Now when I'm writing and get stuck, all I have to do is glance up and there is the goal.

I know a lot of you already do this, but I've never had the space until now. It's so exciting! I feel like a real writer now. :)


So what do you do to keep everything straight while writing?

Janette lives in Chandler, Arizona with her husband, five children and enough cats to classify her as “an eccentric cat lady.” She did not do this on purpose. (The cats, that is; she had the children on purpose.) Every single one of the felines showed up on its own and refuses to leave. Not even the family’s fearless little Westie dog can drive them off.

She is also published as CJ Hill.


We picked up a copy of her book Erasing Time. I'll review it when I get to it. :) 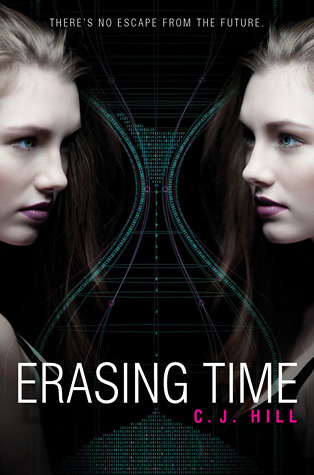 When twins Sheridan and Taylor wake up 400 years in the future, they find a changed world: domed cities, no animals, and a language that's so different, it barely sounds like English. And the worst news: They can't go back home.

The twenty-fifth-century government transported the girls to their city hoping to find a famous scientist to help perfect a devastating new weapon. The same government has implanted tracking devices in the citizens, limiting and examining everything they do. Taylor and Sheridan have to find a way out of the city before the government discovers their secrets. To complicate matters, the moblike Dakine has interest in getting hold of them too. The only way for the girls to elude their pursuers is to put their trust in Echo, a guy with secrets of his own. The trio must put their faith in the unknown to make a harrowing escape into the wilds beyond the city.

Full of adrenaline-injected chases and heartbreaking confessions, Erasing Time explores the strength of the bonds between twins, the risks and rewards of trust, and the hard road to finding the courage to fight for what you believe in.
Posted by Charity Bradford at 9:45 AM