My Last Lines entry is below this one. And, stay tuned next week for my contest announcement.

Yay! My blogfest day is finally here. I really appreciate everyone who signed up to participate. For those stopping by for the first time, here are the two reasons I chose a Baking Blogfest.

1. I love to cook and ran a cooking blog for 2 years, but never gathered as many followers as my first few months on my writing blog.
2. Even the most active MCs need to eat. A cooking scene can slow things down and give the reader a chance to catch their breath before the tension and action starts again. (I think this made it harder to write as well--I know I shouldn't say the word 'boring', but after choosing this topic it has crossed my mind a few times. Sorry!) Cooking can be a tool to create some nice tension--have you read the kitchen scene in Hush, Hush by Becca Fitzpatrick? 'nough said. Although, technically, that was cleaning up after cooking and eating. Still...

So, follow Mr. Linky to the right to see what these great writers came up with. I can't wait to read them. Here are my two short entries. I kept it simple (because my hubby would not approve the spicy scenes I thought up). My verb tense is all over the place in the second entry (and I'm afraid it reads like a list. Does any of it work?) 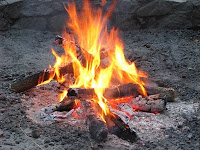 Found Here
The fire crackled, sparks flying upward into the star laden sky. Dar’s muscles ached from the day’s hunt, the satisfying ache of victory. He scraped the skin of the antelope with the chiseled edge of a stone while Brea massaged herbs into the meat.

The rest of the clan hovered around the edge of the fire’s light. Grunting among themselves, they watched Brea dip her hand into the base of the human skull she used as a bowl. Her fingers came out sticky with animal fat and herbs. She spread it onto the meat, working it in with her strong fingers. When finished, she tossed the meat onto a large flat stone nestled close to the fire where other pieces already roasted. As the meat warmed, the smell of herbs mixed with wood and meat, making everyone’s mouth water.

Found Here
The knife’s sharp edge slid gracefully through the skin of the bell pepper. The rhythmic motion of her wrist filled the air with a thump, thump, thump as the petite slices of pepper spilled their juices on the cutting board. One quick turn and two more chops before she tossed the green slices into the bowl. Now for the red one. Thump, thump, thump, the sound brought an onlooker into the kitchen.

“Just a few.” She stopped cutting long enough to pass the little boy three slices. His eyes grew big at the prize and he wanders off, crunching as he goes.

After the red peppers tumble into the bowl, she grabs the yellow onion. She sighs, dreading the pungent smell that will bring tears to her eyes. However, fajitas are no good without onions. She walks to the corner and sloughs the papery skin into the trash can. Before cutting, she sharpens the knife one more time. Perhaps a sharper knife will not crush the onion and release so much of the strong juices. Slice, slice, slice, chop, chop, chop, chop, chop. She dices it small so her kids don’t notice them. The smell of onion fills the kitchen—sweet with a sharp bite following. Into the bowl they go as she dabs at her eyes with a paper towel. Darn onions.

The chicken behind her is almost finished. It browned nicely and when she cuts one in half it is white all the way through. She places them on the cutting board to cool when little hands appear once more. They inch over the lip of the counter and she watches the little eyes guide the hands to the red peppers. Those are his favorite.

“Do you want some more?”

He jumps when he realizes he's caught. “Yes. I want the red ones.”

“All you had to do was ask.” She counts out three more slices for him. “Now stay upstairs until I call you.”

“Okay,” he mumbles around his mouthful of food.

She shakes her head, but can’t help but smile. Little imp. She needed to get those peppers in the pan before he returned for thirds. Using the pan from the chicken, she adds a little olive oil and then dumps the peppers and onion in. The fajita seasonings she cooked the chicken in will give the vegetables a nice flavor.

While they sauté, she cuts the chicken into bite sized pieces and pulls out all the other things. Sour cream, cheddar cheese, homemade guacamole, salsa and warm flour tortillas—all go on the table along with a big bowl of tortilla chips. The veggies are perfect, so she pours the chicken back in and stirs it all up. The sense of satisfaction the colors bring settles on her. Why do fajitas make her so happy? Is it because the whole family will eat them without complaining? Is it because the red and green peppers are so festive? Whatever it is, she enjoys a warm feeling when she looks at the fajita filling in the pan.

Posted by Charity Bradford at 7:00 AM