K is for Keeta vs. Kansisi 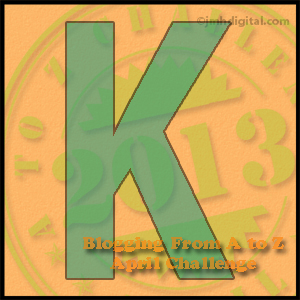 Today I get to talk about two of my favorite things/people in The Magic Wakes.

Keeta
Keeta was a late addition to TMW. After the first read through my editor suggested that Talia needed a friend or familiar. Someone for her to interact with and make her more likable. Talking with trees just wasn't enough. Amie made a suggestion that fit Talia's character but it wasn't quite right. And then it came to me.

I was sitting on the couch with my laptop and my sweet puppy Chewy was sleeping on my feet. Talia needed a warm, fuzzy pet that would love her no matter what and bring her comfort when she needed it most. That's when I sat down and started creating my little treeb.

He needed to be small enough to fit in her bag when Talia traveled, soft, warm, cute, and a bit alien. My puppy has this adorable fluffy tail, so my treeb got one that he could fan out in a display of emotions. In  my mind, I see something that's a combination between a flying squirrel and a chameleon like eyes that can swivel.

Finally this pet needed a name. The first pet I remember having was a puppy back in kindergarten. Her name was Keeta and she had a birth defect that took her from me before she was a year old. It was fitting considering the plans I had for this sweet creature.

Kansisi
In early critiques, people commented that my antagonists were not very scary or evil. The problem was I knew the Dragumon's story from creation up until they returned to Sendek. And they really aren't evil. Shishali, yes, but not the rest of them. They were simply a product of their experiences and Shishali's manipulations.

I actually have a soft spot for Kansisi and all of his lost potential. In fact, in his original "end" I hinted at some of it, but ended up cutting the scene. I thought of sharing it with you but the writing is really bad and the poetic part is vague since you don't know about his life.

*sigh* I am going to write this story. It will be part of the short story anthology called DRAGUMON. For today I'll just leave you with the knowledge that I felt bad for Kansisi and that's why I couldn't make him a truly evil villain. I saved that honor for Shishali. Come back on S day for her story.

Do you have a pet? What's the thing you love best about having a pet?
Have you ever liked your antagonist too much for your own good?
Posted by Charity Bradford at 4:00 AM