I'm always reflecting on my writing and asking myself who it reminds me of, where did the influences come from. It's a combination of the thousand books or so I've read over my lifetime. Every author from my past helped shape my view of the universe and what's possible.

I wish I could tell each of them THANK YOU! Thanks for a childhood full of wonder.

Today I want to highlight one of those authors. I recently went on an Amazon search for some of my favorites by Louise Lawrence.


She wrote science fiction for teens when not many others did. And she was a woman! She published her first book a few years before I was born, but her stories still resonate deep in my soul. As I've reread her stories I can see ideas in her writing that are a part of who I am. In many ways she planted the idea that I could write my own style of science fiction and share those stories with the world.

The first book I ever read by her was CHILDREN OF THE DUST. 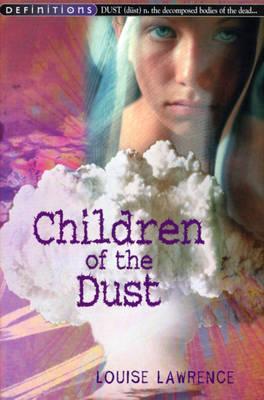 From Goodreads:
After a nuclear war devastates the earth, a small band of people struggles for survival in a new world where children are born with strange mutations.

Everyone thought, when the alarm bell rang, that it was just another fire practice. But the first bombs had fallen on Hamburg and Leningrad, the headmaster said, and a full-scale nuclear attack was imminent.

It's a real-life nightmare. Sarah and her family have to stay cooped up in the tightly-sealed kitchen for days on end, dreading the inevitable radioactive fall-out and the subsequent slow, torturous death, which seems almost preferable to surviving in a grey, dead world, choked by dust.

But then, from out of the dust and the ruins and the destruction, comes new life, a new future, and a whole brave new world.

My Take:
I reread this last week. It only took half a day, and I was surprised at how deeply it touched me. Maybe it's my age, maybe the fact that I'm a mother of teenagers now. I don't know, but I was crying in part one and the emotion never left me.

The choices these people have to make are impossible, and yet Lawrence highlights the best of humanity right beside the ugliness. The juxtaposition of those aspects of our personalities keeps everything very real. The book is divided into three sections: Sarah (the fallout), Ophelia (20 years after fallout) and Simon (55 years after fallout). I'll try and highlight what I love about each section without spoilers.

Sarah--
There is vicious anger at the hopeless situation, followed by the depression. Then Sarah steps up. She accepts the fact she has no future, but is determined to do everything she can to give her younger half-sister something for a new life. The struggle doesn't end, but once she has a purpose she can't quit. The real question is how to accomplish this.

Ophelia--
She was born in an underground military shelter. Life for her is school and genetics and Dwight Allison. When Dwight has had it with all that he sees wrong with the system, he heads outside to warn the few outsiders that survived the nuclear winter. Ophelia goes with him and gets a glimpse of a world to scary for her to deal with. She leaves Dwight to return to the shelter but his words will haunt her the rest of her life--Dinosaurs in bunker.

Simon--
Dwight's prediction is coming true. The few left in the bomb shelter have waited for a technological miracle that never came. Simon leaves with a small group to ask the outworlders for assistance. He still carries the arrogant thought that he's better than the mutated humans living outside. He's educated after all. Does it matter that his people don't know how to do anything practical to help them survive in a new world? He's about to find out just how insignificant and important he really is.

As far as I know, all of Lawrence's books have been removed from libraries. I know! You can find them fairly cheap on Amazon. I bought four of her novels and after shipping they averaged about $5 a piece for hardback books.

Here's a list of the other three I bought--
Moonwind
Calling B for Butterfly
Andra--This is her first novel, published in 1971


What author do you think influenced your writing the most?
Posted by Charity Bradford at 3:00 AM