A Little Clarification--Geocaching and Sendek

I want to shed some light on two things that came up this week.

Geocaching
The first is easy. Several of you wanted to know what in the world Geo-caching is. Well, I'm no expert since I've only been once, but it was pretty cool.

My good friend Laura has this nifty little GPS device specifically for geocaching.

We went to a park, she turned it on, and three "treasures" showed up. (We were with 4 year olds) Anyway, anyone can create a cache, upload it to the network and then other people can come find it using the coordinates you entered and any clues you may provide. 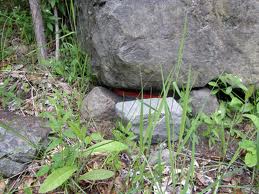 The "treasures" are hidden and you try to have them blend into the surroundings as much as possible. See the box under the big rock? 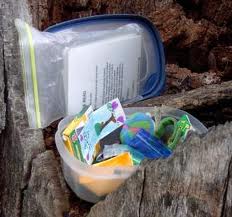 When you find the box, you open it up and there should be a list where you can sign in that you found it and leave the date and maybe your hometown. Some have little nick knacks as well. The idea is you can take something, but you put something back in its place. This is what the 4 year olds LOVED. I thought it was neat to see all the names of those who came before.

The coolest part is you can do this all over the world. Laura is going to Ireland next week (LUCKY!) and she's hoping to do a bit of geocaching while she's there. If she can convince her hubby.


Sendek
For some reason, and this keeps coming up with different people, my WIP is confused with YA novels. Critiquers leave comments such as "for a YA book this is...", "I wouldn't use this word in a YA  novel, it's jarring", "even in a YA novel you could..." and so on.

Sendek is NOT a YA novel. I don't even understand how this is happening. My MC is 28 years old and well established in her career. (Don't worry this isn't a rant, and I am looking to see if there's a way I can make this clearer on the first page.) But, I'm writing in first person and she doesn't think like a teenager.

Anyway, the second concern I have from various critiques is the science fiction question. My novel is a science fantasy. I found this term and genre during my months on Nathan Bransford's forums. It simply means I have elements of science/speculative fiction and elements of fantasy.

What if a logically minded scientist also had mage blood running through her veins?

This doesn't mean her science has to be more advanced than what we currently have on earth. In fact, since the novel isn't specifically about the technology, I don't think it matters what level they have reached.

A little about Sendek's technology--I believe science progresses more quickly in the areas of importance for society. For instance, Sendek was more concerned about saving the environment than reaching the stars, so they spent time, energy and resources in developing fast, fuel efficient planetary transportation. They also developed food replicators to cut down on planetary hunger, wide net systems for communications, and the military has developed utility belts equipped with personal cloaking devices (society at large is unaware of this). Because that is what they felt would benefit them the most.


Now they are turning to the stars, but starting at the beginning. Trial and error, scrambling for the funds to test theories, etc. They're not ready for sky hooks or elevators, transporters or anything else. However, by the end of book one they find themselves in possession of two interstellar ships ready to be studied. The "jump" in technology approaches.

Perhaps my biggest problem is that I see the big picture. The ebb and flow that I want between science and magic over the course of the four books. In the end it all makes sense, but I need to keep the reader with me until the end so they can see it.

In the end, science and magic will enhance each other in such a way that an entirely new universal order is born. It's way cool. But I guess you'll just have to trust me on that for a while.

Until then, what are your thoughts? Is it hard to fit your novel in accepted genre labels? (I didn't even touch on the strong romance thread in this post) Do you find yourself at odds with the accepted thought and worry if that's going to kill your novel in the end?

On top of all that, I'm terrified I'll never find the right words to translate the vision in my head to the paper. Well, I guess it'll never happen if I keep sitting here. Off to move words around on the page until I find the perfect order. :)
Posted by Charity Bradford at 10:14 AM