If you are looking for some of the other blogfests from this week:
Critique Partner Blogfest
That's YAmore Blogfest 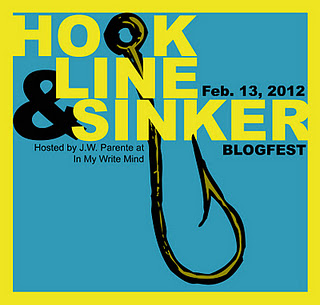 Today is the Hook Line & Sinker Blogfest hosted by Justin Parente. Click the link for rules and to find the other participants. I'm supposed to post the first 500-1000 words and see if it hooks you. Here are some questions you can answer for me at the end.


And now I give you the first 700 words of Eleena's Tale.

I hid from Mother’s gaze inside the tall blue-green grass in the park bubble behind our home, but not from her voice. It called for me from opposite sides of the field. She must have sent the message bots to call me. I rose up on one elbow and peaked over the grass. Sure enough, three message bots glided around playing the memo, but Mother stood by the house just outside the bubble wall.

“Eleena Talrano, come to the house immediately.” Mother’s voice echoed around me.

I sunk to the ground and continued counting the clouds. She sounded scared. It was wrong to run away, but five minutes of dreaming couldn’t hurt anything. Studying all the time was boring, and the evacuation traffic made it almost impossible to concentrate insided the house. With the war getting closer, most of my friends had left. Nothing was fun anymore.

Father never came home before dark. I jumped up and looked toward the house. Mother was gone, but Father stood with his hands on his hips. My heart pounded uncomfortably. He had been so moody lately, always yelling, or worse, silent.

“Coming.” I grabbed my shoes and ran to the edge of the park. The traffic noise filled the air as soon as I stepped out of the bubble. “Why are you home so early?”

“Come inside quickly.” He stepped into the darkness of the house.

I chewed on my fingernail and followed. Mother clung to a tall redheaded man. Although I hadn’t seen him for two years, I recognized my favorite uncle back from the stars.

“Uncle Murph!” I moved to hug him but stopped when Mother turned toward me. Her tear streaked face contorted into a mass of wrinkles I never noticed before.

“You have to go with your Uncle. He’ll explain everything on the way.” Mother spoke over the rattling of the dishes as another shuttle flew overhead.

I glanced from her to Father and back to Uncle Murphy. They all stared at the ceiling. Mother’s fingers twisted and tugged at each other, Father’s eyes looked watery, and Uncle’s smile didn’t reach his eyes. It was getting hard to breathe, then Mother pulled me to her, squeezing too tightly.

“Where am I going?” My words came out muffled against mother’s chest. She smelled like pasta sauce.

“You’re going to stay with Murphy for a while.” Father spoke as he peeled me away from Mother and hugged me. “My little star, you’re going to travel.”

“Why?” My voice cracked. Were they sending me away like all my friends? Was the war really coming to Artemese?

“There’s no time. Listen to Uncle and you'll be fine.” Father pulled away from me.

“We must hurry to catch the shuttle. Is there no way to convince you to come with us?” Uncle Murphy held Mother’s hand but his eyes watched Father.

I looked at Father in time to see him shake his head. Uncle Murphy reached for the bag on the table. Mother hung a pack of food over my shoulder and kissed my head before turning back to Uncle.

“Peace on your path, Brother.” Tears slipped down Mother’s cheeks as she stepped to Father’s side.

I waited for the standard reply, but Uncle paused. He caught me watching him.

“Burn a light to guide me home, dearest sister.” He sounded like he had swallowed his gum berries without chewing them.

It brought tears to my eyes.

“Go quickly.” Father gently pushed me to the door as Uncle Murphy walked through it. “Be a good girl, and remember we love you.”

Uncle grabbed my hand and pulled me into the crowded street. People had abandoned their transports in the middle of the road. It seemed like the whole world was running to the space port. My feet beat a rhythm that matched time with my heart as we ran.

The pack Mother handed me slapped up and down on my thigh.

Good-bye.
Posted by Charity Bradford at 2:00 AM