Cover Reveal for The Magic Wakes

I have had one of the most exciting weekends of my life. It all started with an email from my editor with the cover for my debut novel. Now the book and blurb are up on Goodreads and suddenly this feels REAL.

I also found the perfect stones for Talia's necklace just last week. The jeweler is purchasing the rest of the supplies and very soon I'll have her necklace. One for me, and a couple to give away at the book release! Christmas came early for me this year!

And now, I get to share my official cover, blurb and release date with YOU! Thank you all for sticking with me all these years. You are the ones that kept me going when I wanted to quit. I'll never be able to show you how much you guys mean to me. 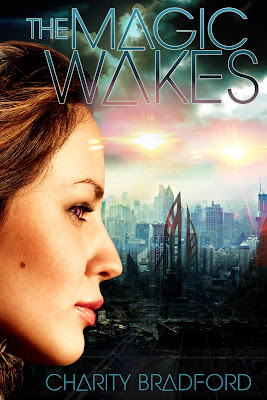 Talia has a secret, one that will save her world and yet rip it apart. Only she can decide if the price is worth it.

Scientist Talia Zaryn has always had visions of an alien invasion and of her own death. She’s kept it a secret, hoping they are nothing more than childish nightmares. But when her face in the mirror matches that of her dreams, she fears the dreams are prophetic. Talia must prove that life exists beyond their planet, Sendek; perhaps then people will prepare to fight.

Talia's work at the Space Exploration Foundation leaves no time for personal relationships, but Major Landry Sutton isn’t looking for a friend. He is looking for a traitor. His ability to sense emotions convinces him Talia is that traitor until a touch sizzles between them. In an instant their minds are connected and they can communicate telepathically. Just as the two begin to trust each other, the invading force arrives.

Talia and Landry must uncover the secrets of Sendek’s past if they hope to defeat these terrifying creatures. And Talia is the key—if only she can learn to trust the magic coursing through her veins.

I'm starting to organize my Blog Tour for February 5th-19th. If you'd like to help out with a review, interview, guest post, or just by sharing the cover and blurb let me know by emailing me at charity.bradford @ gmail.com.

As soon as I get ARCs I'll be giving them away!