If you're looking for my DINYB entry, click the link.


Ten Interview Questions for The Next Big Thing:

Feel free to grab the questions and do the same. I know I'd love to hear more about your novel or current wip. 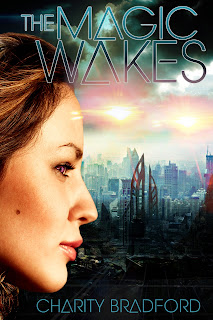 1. What is the name of your book?
The Magic Wakes

Previously, and still between friends, Sendek. Although the new title lends itself to nifty marketing catch phrases much easier. The Magic Wakes on February 19th, 2013 is so much cooler than Sendek ??? on Feb...see what I mean?

Can I just say one more time how much I LOVE my cover! I never learned the designer's name, but they did a great job.


2. Where did the idea for your book come from?
The original seed came from a freaky dream I had when I was 19, combined with another one I had when I was 28. These creatures were chasing me through underground tunnels with one purpose--kill me. I still don't know why, but that dream stuck with me all these years.


3. In what genre would you classify your book?
Speculative fiction would be the easy answer because it's complicated. :) See question 10 for more details.


4. If you had to pick actors to play your characters in a movie rendition, who would you choose?

5. Give us a one-sentence synopsis of your book.
As her nightmares of invasion and death become reality, a scientist embraces her hidden magic to save her world from an ancient mistake.


6. Is your book already published/represented?
It will be released February 19, 2013 by WiDo Publishing. You can already pre-order the book on Amazon, but the Kindle version isn't up yet. It's still early, but so fun to see!

7. How long did it take you to write your book?
I got serious about writing in 2008. That's when I knocked out the completed first draft for Nanowrimo.

8. What other books within your genre would you compare it to? Or, readers of which books would enjoy yours?
I hate this question because I'm never sure how to answer. I read more YA (I'm fixing that) and so I compare myself to those authors, but this is not YA because of the age of my characters. But I think people who like Elana Johnson, Beth Revis, Janice Hardy, and Stephanie Meyer will enjoy my writing style.

This is what I would consider an easy read--high adventure, fast paced, but not so technical that you get bogged down in details. Those who enjoyed Alex Cavanaugh's CassaStar might enjoy this as well.

I would hope that people who enjoyed Michael Offutt's Slipstream would enjoy this even though I'm no where near as scientifically detailed as he is.

9. Which authors inspired you to write this book?
I've devoured books since the 5th grade and there are way too many authors to list. I love to read authors who make the book about the story rather than the science or the particular brand of magic. Those elements should flow through seamlessly.

10. Tell us anything that might pique our interest in your book.
This book was written as an escape for me, and for you. There's a little science, a little fantasy, lots of adventure and chases, aliens, a dragon, and a romance. The dragon has only a small part in this book, but will play a greater role in upcoming sequels.

You can learn more on my Goodreads Page or my Author Website.

Here are some links to a few other people participating in this meme today:

Posted by Charity Bradford at 11:02 PM