Vote for my 2015 Summer Pool Project

I need your help! Traditionally I have a "pool novel". This is a project I work on just for fun during the summer. (FADE INTO ME started as a pool project.) Here's the beginning to two totally different novel ideas I have. Please read and then vote for which one you'd like to read more of. Your vote will determine what I write at the pool this summer. I'd also like to know why you're interested in the one you vote for.

Choice #1 Possibly a YA Space Opera
I'd like to find great art to make a trailer, but it's hard to find images that fit. grrr... 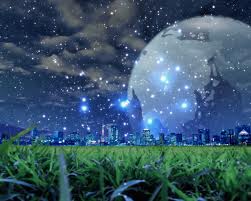 I sat behind the med tent on the far side of camp. It was the only place dark enough for me to see the stars. My family was out there somewhere. At least I hoped they were still alive. If only my parents could scold me for skipping classes one more time. I’d go back and be the perfect daughter, or at least try.

“Ahakoa, like I’d be missing much.” I rubbed a hand over the bristle of hair on my head.

“You’ll get used to it.” She rubbed her bald head too. “Way better than the bugs.”

“Come on and stop staring at the stars. You’ll never find them up there.”

She was right, and I hated her for it. With a sigh I followed her to the mess hall. We rounded the side of the building. The line stretched past the hall and around the school. The camp was full of refugees. Young, old,tall, short. Some still had their hair indicating they’d recently arrived on_____. None of them could be called clean or fat.

“Bet we don’t get much tonight.” Harper groaned. “TomorrowI’m not looking for you.”

We waited, moving forward with the line and hoping for at least a bit of bread to dip in some watered down broth. It had been a month since the last food shipment. Rationing would only last so long.

“When do you think we’ll have to emigrate again?” I asked while watching a young mother with two small children approach from the east.

The mother had hair down to her waist. Ratted and dirty, it covered the rip in her shirt. She stared at the ground. Her little boy had dried tear streaks in the dust of his face. The girl stared vacantly in front of her. They were all pale, but the girl showed the signs. Swollen tummy,listless. It wouldn’t be long.

They stepped into line behind us, and we shuffled forward another foot.

“I know what you’re thinking. It won’t help and you know it.”

I looked away. Maybe it wouldn’t help, but then again it might.

We finally reached the flap entrance to the mess tent. I heard whispered voices, but mostly the slurps of the hungry. No one looked our way as we took a bowl from the staff. No bread today. I sniffed the broth. It didn’t really have a smell.

“Looks like tonight’s fair is water with a slice of carrot .” Harper took her bowl to our spot in the corner.

The mother and her children passed me. I followed them to a table near the center of the tent.

“Hi, looks like you’re new.” I crouched beside the little girl and spoke softly. Her mother watched wide-eyed with trembling hands. “We have a tradition. New girls get extra soup their first day.”

I poured mine into her bowl.

“Thank you.” The small voice belonged to the mother.

“I’m sorry you’ve found your way here.” I left their table,returned the bowl to the pile and headed to the girl’s tent.


Choice #2 YA Contemporary (no magic! A first for me)

The machine kept a steady rhythm of beeps offset by the swish of oxygen. Mother slept peacefully for the first time in months. Her dark hair would never finish the journey to grey. For the first time that thought didn’t rip my heart out.

She squeezed my hand and forced her eyes open. “What was that sigh for?”

“I thought you were sleeping.”

“I was.” She pulled my hand to her chapped lips and kissed it. “I think it’s almost time.”

She nodded. “That sigh was your acceptance then?”

“Shh, you’ll be fine. You won’t have to take care of me anymore. Maybe even get to college after all.”

“I didn’t mind taking care of you.”

“No, you’re a good boy. You’re dad would’ve been as proud of you as I am. Go to college and make a life for yourself.”

Sweat trickled down my neck and I rubbed it away. “What if I want something else?”

She looked up at me, eyes shining, a little smile teasing her lips. “What do you want, Colter? More than anything else?”

“Then you sing your heart out.” Another squeeze of my hand, this one weaker than before. “Don’t let anything or anyone stop you.”

“I will. I’ll hear every single time. Believe that.”She coughed and I reached for the cup of ice.

“Colter Lee, you get back in here. I’m not done with you.” Aunt Ruth yelled down the hall.

She might not be done, but I was. It had been six months of misery. Ruth provided a place to live, but she thought that gave her the right to dictate every aspect of my life. That had been fine when those details included selling the house in New York, paying the medical bills and moving to Ohio. I even took the job she set up for me working construction.

I slammed the bedroom door and pulled out my suitcase. There wasn’t much to pack. A couple pairs of jeans, four t-shirts and two button-down ones. My boots went in next and last of all, the photo of my parents. I put my guitar in the case and that was it.

Ruth knocked on the door. “Colter, we need to talk about this.”

I pulled the wad of cash I’d been saving out from under the mattress. Six months and I’d only saved a lousy two hundred dollars. Half went into my wallet, the other half into the toe of my boot.

“Colter?” She opened the door and stopped to stare at the suitcase. “Don’t be so childish.”

“Aunt Ruth, thanks for your help, but it’s time I got on with my life. The things I promised Mom I’d do.” I walked to the door and gave her a hug.

“But you’ll lose your job. What will happen when this crazy notion of yours doesn’t pan out?”

“I’ll deal with it.” With the suitcase in hand and my guitar strapped to my back I headed down the stairs, Aunt Ruth close behind.

“I won’t help you if you walk out that door. Colter!”

I paused, hand on the doorknob. It would be easy to stay. Work construction for the rest of my life. Never leave Ohio. But I hadn’t felt a song move through me since Mom died.

“I can’t keep going through the motions and feel this dead inside. One day I hope you’ll understand.” I grabbed my jacket from the hook and kept going.


Last October I played around with making a book trailer for this one.
Posted by Charity Bradford at 4:00 AM