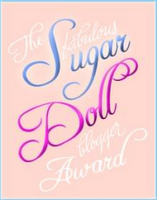 …For this lovely award. To claim it, I have to tell you ten unusual and/or unexpected things about myself. I'm flattered anyone is interested this early on in my journey. So here goes:
1. I was born breach at a petite 5lbs, hated to sleep and screamed constantly my entire first year of life. After that my mom says that I became the model child, even through my teenage years. See, sometimes you just have to wail and cry, get it all out, and then you can move on with your life.

2. During the ages of 12-16 I lived in a house without running water or indoor plumbing. Actually it was two trailers parked next to each other with holes cut in the sides and a connecting porch built between them. We had an outhouse and learned to bathe with a bucket of water and washcloth. Funny thing is that I never thought we were poor, I still don't think we were. I had 40 acres of woods to run around in and I got to drive the truck to fill the water jugs up a couple of times a week starting when I was 12. (The reason we did not have running water is because there was no city water option and the well we dug was sulfur salt water. Yuck! The neighbors had sulfur [which is excellent to wash your hair in!] but no salt. So I would drive the mile to their house, fill up a truck bed full of milk jugs and drive home. After sitting with the tops off for a day or two, the sulfur would evoporate from the water and we could use it for cooking, dishes and bathing.)

3. I broke free of my shy shell my Junior year of high school by becoming the basketball mascot. Go Tigers! Please, you need to be aware that I was very much a nerd in school. Very studious, a little clumsy and I had absolutely NO fashion sense, but that was ok because it was the early 90's--no one had any fashion sense. Becoming mascot was great because I finally had a chance to do something out of my comfort zone and I discovered that I enjoyed it. My favorite moment was when I got into a "fight" (aka. a lot of gesturing with our arms while hiding behind the giant animal heads we were wearing). For the first time I felt like a normal teen.

4. I met my husband when we were both 12 years old. In the beginning we were friends and I set him as my future standard of "the all around good guy". As time went on we started going to church dances at age 14 and I decided that I wanted to marry someone like him someday. He was the only guy willing to move around the dance floor--really dance--instead of the little circle that made you dizzy and your legs to go numb. By the time I graduated I had decided that I really liked this guy and would not mind if I married HIM someday. He finally turned 19 and headed off on a 2 year mission for our church, and we were both hoping I would still be around when he returned. When we got married, we had known each other for 10 years! We have been happily married now for 13 1/2 years.

5. I graduated from Brigham Young University a year after having my first child. I took a semester off when she was born, and then my hubby and I passed her back and forth so I could finish my last three classes. My degree is in Elementary Education and I hope to never teach school. I would love to go back to school but I can't decide what to study. Culinary school or writing classes? For now I'll work on both. :)

6. One day I would like to write a book about my mom's struggles as a single/married/divorced mom. She has been married and divorced four times. We talk a lot about it in an effort to figure out why and how it never worked and so on. My mom has always been one of my best friends and it hurts to think she has never been happy in her marriages, and yet she is one of the most positive people I know. I want to learn how she does that.

7. I almost died when my third child was born. My appendix ruptured, but the midwife thought it was simply gas. ?!?!? (Note: I was in the hospital and all of this happened after the midwife insisted I was in labor and broke my water bringing my son into the world) She sent me home a few days later and I ended up back in the ER filled with noxious gunk that sloshed whenever I moved. I remember walking into the ER and then the next week is a really big blur. Most of those memories have been supplied by friends and family. From Jenny--One day she visited me in the ICU and I went on and on about the best chocolate chip cookies I had ever had. She felt so bad because she knew I had not eaten anything in a week. From Nicole--We came to visit but you didn't know who we were. (Scary! She had my kids with her.) I remember the Everest Gum. I was so thirsty. I could care less about the no food thing, but I needed water so bad! A nurse tried to be kind and offered me gum because my mouth was so dry. This is when I learned that you need spit to chew gum. What a mess!

8. I averaged 1 year per school/state during my elementary school years. No, my dad was not in the military. He just liked to move...a lot. This meant that I had a lot of gaps in my education, and one of the reasons I studies El Ed in college. I love to learn and my college classes finally brought some "ah hah!" moments--especially in math. I think the moving made me who I am. I love people, all people. When you move around a lot you can't be picky about your friends. I learned that we all have something unique and wonderful to offer if people will only give us a chance. I talk to people in grocery lines like I've known them forever, much to the discomfort of my hubby.

9. If writing or cake decorating don't work out, I want to become a professional ballroom dancer or run my own bed and breakfast. Or, maybe start my own restaurant. Mmm, I've decided that I'm never going to "grow up" and I'm going to try all of these things at some point in my life. I need to sell a book or two to afford the ballroom dance lessons though. Holy cow they are expensive! 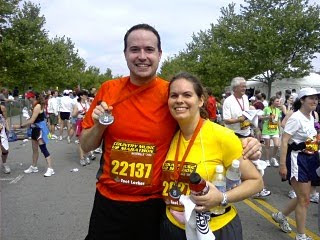 10. My goal is to run my first full marathon this fall. My hubby and I will run the Country Music Half in April for the 3rd year in a row. I love that race! Even though they changed the course last year and ruined the most stunning view. The first year there was a point on the course where you ran across a bridge and if you looked to your right you could see the thousands of people behind you crossing the first bridge, and to the left the thousands of people in front of you crossing the third bridge. It was a powerful moment for me to feel like a part of something so huge. I cried most of the race for lots of different reasons, but last year I really missed that cool moment. Dear Race Organizers, Please change it back!

I don't know who I want to pass this along to. Until I decide, feel free to do the same and post a reply so I can come and read all the fun things about you.
Posted by Charity Bradford at 9:58 AM