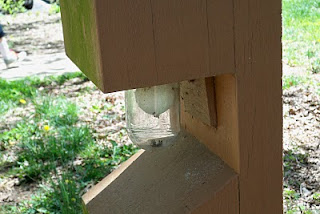 What is this? Would you believe me if I told you it was a bee catcher?
During spring break, we saw these outside the nature center and my hubby thought they were bee catchers. He is really tall and all he could see from his point of view (see the writing reference? ;) was the glass jar and dead bees. He didn't see the light bulb so his brain filled in the gaps, much to my 12 year old's pleasure. She laughed and teased him (we like to tease in our family) and we moved on.

I knew I would post about this. Not to make fun of my hubby. In fact, I suspect he has a writer hiding inside of him. Writers need to look at every day items and turn them on their head. The ordinary must become unique and fascinating to hold the reader's attention. So, although the world says this is a light, I'm with my hubby--it's a bee catcher, or a spying device, or...

CHALLENGE: Find an ordinary object and create a new scene for it and give it a new purpose.

And now, the murder scene my hubby wrote, just for fun, after reading mine. Unedited and wonderful in all it's glory. For someone who claims to not be a writer, I see potential--although I wanted to go through and rearrange his sentences to take out the passive voice, but I didn't.

She reflected on the previous nights where she had been close to sleep when she heard him enter the room. He never said anything, but his movements let her know he was there. He never hurt her, but she could not bear the thought of him touching her skin, it made her shiver at the thought. He only stayed a few hours each night and then just as quickly as he arrived, he would leave. But not tonight, he would not stay long, and he would not enjoy the pleasure of one more touch of her skin.

Earlier in the day, she searched the kitchen for the perfect weapon—one that would do the job quickly. She smirked thinking how it would catch him by surprise. As her thoughts drifted in and out, she heard him enter the room. Her blood ran chill momentarily at the thought of him in her home. She lie motionless on the bed pretending to sleep. She heard him on the other side of the bed getting closer. Just as the nights before, she felt him touch her skin, instantly sending chills crashing over her. No, she thought, not again.

As her resentment turned to anger, she slowly reached down to the floor where she hid the weapon earlier in the day. She felt the coolness of the metal handle as she gripped it in her hands. Then, with a stubborn resolve, she decided to turn and face the demon that had terrorized her the past few nights. Slowly, she turned and saw him. The sight of him in her bed made her stomach turn. And her instincts, fueled by her rage, burst like a dam. Her arm, still hidden from him, flung over her body, and the weapon connected solidly with his body. She hit him over and over again making sure he was dead—she was certain the first hit killed him, but she wanted to make sure.

Breathless, she looked at his lifeless body as a grin spread across her face—it was done. She slid the covers off her legs and walked to the other side of the bed. She leaned over and picked up his withered body, walked to the trashcan and dropped him in. She returned to the bed, picked up the flyswatter, placed it gently on the nightstand and crawled back into bed.

As she drifted off to sleep she muttered, “I hate flies.”

Posted by Charity Bradford at 7:27 AM