Are you close to giving up on me?

I know I've been really quiet and not reliable about posting since the beginning of November. The truth is I can't think of much to post about. Life is moving on in its normal fashion and my biggest goal is to concentrate. On something. Anything.

Which means any free time I get I'm staring at my document willing myself to write the next scene. It's so hard! I want to go back to the beginning and make the changes I decided on during that long drive home after Thanksgiving. BUT, I know if I do that I'll start editing, revising and generally putting off getting to the end of this story.

I've set the goal of writing 5 new pages every day. It's not much, but my kids have been out of school since last Thursday due to snow and ice, so it's better than nothing. I'm also allowing myself to edit 5 pages a day in the hopes I'll satisfy that craving and still keep writing. The deal is I have to write the new pages before I can edit. It's working out pretty well.

The only problem with this tree, other than we have to get out the BIG ladder to decorate it, is that most of the lights didn't work. Hubby was very disappointed but realized it would still be cheaper to keep this tree and buy more lights. I suggested we don't buy lights until after Christmas when they all go on sale. Yes, I'm cheap. Anyway, I then pulled out our big Charlie Brown lights that usually go on our house. They aren't up for two reasons-- 1. our roof is too steep for either of us to feel comfortable up there, and 2. It snowed like crazy before we could convince ourselves to pay someone else to do it. 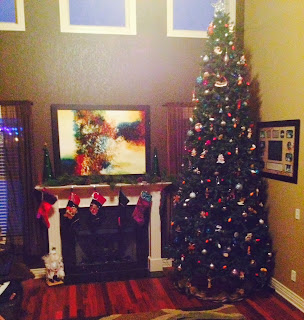 Are you wondering about that pizza quiche? It's my favorite pie ever. No one else in my family likes quiche so it was my attempt to get them to try it. Standard recipe, but you use sausage and pepperoni for the meat and a blend of cheeses. It's so yummy. I made one earlier in the week and have been living off it. Sadly it's now gone. *sigh*

Next week will be my week over at Unicorn Bell and I've decided to do photo prompts or "fill in the caption".

Have you seen any amazing photos in the last week that I should take a look at before choosing? Just share the link below.

Thanks!
Posted by Charity Bradford at 9:14 AM