I didn't realize it until I logged into Facebook and saw all these "memories" posts about my book on there. It's been 3 years since THE MAGIC WAKES was released by WiDo Publishing. 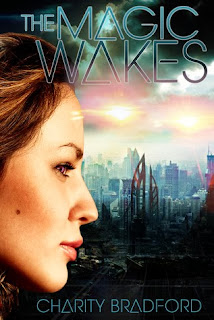 Since childhood, scientist Talia Zaryn has been haunted by recurring dreams, visions of an alien attack on her planet Sendek. Each time it ends abruptly with Talia’s death in the capital city Joharadin, a city that she has spent her life desperately avoiding. Talia keeps these dreams a secret, hoping they are nothing more than childish nightmares. But when she is unexpectedly transferred to Joharadin she is convinced that the conflict, and her own death, is at hand.

As Talia’s nightmares occur with increasing frequency, they reveal the imminent invasion of a half-dragon, half-human race called Dragumon, bent on the annihilation of her world.

In Sendek, magic is dead and science rules, forcing Talia to keep another secret, one that could cost her everything if it were known. Now, in order to save her planet, Talia must awaken the powers within her and rely at last on the magic that is her true inheritance.

I wish I had the sequel's cover to reveal today, however we'll have to wait on that. Instead, here's the book trailer from my first novel and an updated blurb for book two. Feel free to comment on the changes and ask more questions. It helps so much!

The Dragumon have been defeated, but the planet Sendek will never be the same.

Talia and Landry Sutton brought the mages together to unbind the human-dragon hybrid bent on destroying their world.  Instead of restoring peace, the discovery of magic created chaos in the city streets. Lines are being drawn between those who can work magic and those who can’t. The Suttons have a plan—create a Mage Council to govern the use of magic. They hope it will be enough to reconcile the factions long enough to travel to Orek and learn how that world successfully combined magic and science.

Landry struggles with the memories passed to him from a dead wizard. Talia on the other hand hasn’t dreamed for months, but on the eve of leaving for Orek her nightmares return. She knows they must go. However, if they do, she could lose what matters most—Landry.
Posted by Charity Bradford at 11:29 AM