Where do you find inspiration for your writing?

I find it all around me. Sometimes it's the light filtering through the trees, the clouds drifting by, the kids playing make believe in the cul de sac, kind acts I see performed around me, conversations overheard, twitter feeds, family conversations, etc.

In my effort to spend as little time as possible blogging this week, I want to share a conversation between my hubby and I on our myfamily.com website. Yes, it's sad that half of our conversations are online. I'm sharing this because it was a bit of inspiration for me to file away for a future writing day.


Hubby: (in reference to having killed two snakes in our yard on Saturday) I don't care what color snake it is, if it ends with SNAKE it's bad! And if it ends in SNAKE and crawled under my car towards my house, it's even worse!! Black snakes are the good guys.... you guys make it sound like it was a cuddly little teddy bear or something!! I don't need a fear management course, I confronted my fear--with a shovel :) I may need an anger management courses if this "Save the Snakes" mumbo jumbo continues. :)
Me:  LOL, "I confronted my fear--with a shovel" Can I use that in my novel? Or a future one? That's a great line.
Hubby:  If you did, it would have to be a magic shovel :)
And my mind went crazy with ideas. Here's one just for my hubby. I'm picturing him on a scout camping trip. Names have been changed to protect the innocent ;) And, um, I just sat and wrote this, so it probably isn't very good. I just thought it would be a nice practice exercise--using a magic shovel as a writing prompt. 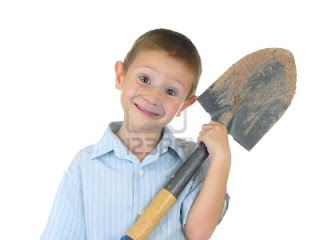 The boys lay on their sleeping bags pretending to sleep. The night was sticky hot, but they zipped all the tent flaps tight. Both boys tried to breathe calmly in spite of hearts pumping too fast from a night of ghost stories around the campfire. Insects and frogs filled the forest with chirping, and the camp leaders murmured by the fire. Muscles relaxed, hearts slowed to normal as the orange glow of the fire soothed them into sleep.

Some time in the night, Ryan sat up. He peered through the darkness, but the other boy did not stir. The fire had burned out and even the night creatures had quieted. Ears straining, he heard the noise again. A clicking sound behind the thin fabric of the tent. He scooted to the middle of the tent, bumping the other boy.

"What ya doing?" The boy mumbled as he turned over and continued sleeping.

"There's something out there."

No answer. The clicking sounded again, moving away now. Ryan's mind searched for an image to put with the sound. None came to mind. Wide awake and curious, he slid his sneakers on and unzipped the front flap. Flashlight in hand, he crawled out. A shovel lay beside the stones surrounding the fire pit. Ryan picked it up and carried it with him. Better safe than sorry.

Ryan followed the clicking noise through the woods, but never glimpsed the creature making it. His shoulders ached from carrying the shovel, and his eyes burned from straining to see all around him. The flashlight burned yellow as he turned back toward the camp. At least he hoped it was toward camp.

Leaves rustled around him and something thudded to the ground to his right. Heart racing, he recoiled from the sound. Ryan dropped the flashlight as he gripped the shovel in both hands holding it in front of him like a lance. His eyes darted over the ground illuminated by the light, searching for whatever approached. It came silently. A large snake slithered into sight a foot in front of him. Ryan's skin crawled. He hated the way snakes moved. Silent, creepy, deliberate movements straight toward him. His legs remained anchored to the ground, but his arms pointed the shovel toward the snake.

"Aaahhhrrrgg!" He stabbed the snake over and over again. Sparks flew off the shovel each time Ryan sliced through the soft body. He paused to catch his breath, and watched as each chunk of snake glowed brighter. The silver light bursting into the sky until he had to shield his eyes.

It is good to face your fears. Open your eyes and meet your destiny. A voice rumbled through his mind.

Ryan's cracked open one eye, then the other. The light resolved itself into the gray of dawn. The pieces of snake now loomed before him. Four giant snakes raised up and waving as if on a breeze before him. Their eyes glowing silver as they glared at him. Ryan felt his heart pause as his eyes widened. Goosebumps marched down his arms to the hand holding the shovel. As his heart raced in an effort to recover from the shock, Ryan tightened his fingers around the wooden handle. It too glowed silver and changed into a broadsword, perfectly balanced for his body height, weight and strength. Power and courage flowed from its hilt, vanquishing the goosebumps on the way to his heart.

"I'll face my fears." He grounded his feet, settled his weight in his hips and raised the sword. 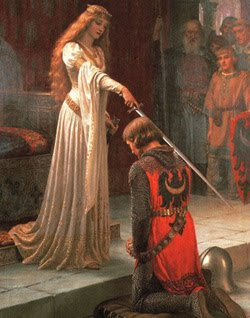 And he is on his way to becoming my knight. Photo found HERE.


What random things inspire you to write? Please share some in the comments section in the form of a writing prompt.
Posted by Charity Bradford at 12:52 AM