I haven't quite recovered from my week of cooking at Girl's Camp, so I'm posting a blog post from January 2010. This is still how I revise my rough drafts.

January 2010
My signature on most forums is some form of the following: "If you are a mother and a writer then you have to make the time to write everyday. Because nobody is going to give it to you. I guarantee it. That means a lot of other things in your life have to go." Once again, thanks to Hoontah for those words of wisdom. (I bet you had no idea how powerfully they would strike me.) Well, I have taken that to heart. Here are some ways I make time. 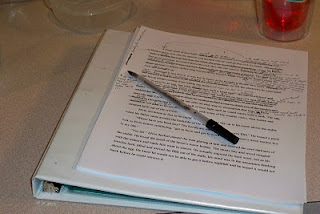 I keep some pages printed off so I can work on them while cooking.


I also keep a notebook with me in the van and write while I sit in the carpool line. That is a good 15 to 20 minutes every day.

When I sit outside watching my kids play, I either have a notebook or laptop with me, for when inspiration strikes.
Wednesday is the day that my three year old gets to go to his special pre-school class--aka the free "Just For Me" class at the library. It is thirty minutes that I have free to write uninterrupted. Today was a good day. I took one sentence from my draft and turned it into another 400 words. Those words will get revised again at some point, but here ya go!


Later that evening, after eating his small dinner, he finally managed to get up to his room.


By the time he finished spreading the muck onto the field, his muscles ached and the first sun had sunk below the trees. Elvin washed his hands and face in the rain barrel, watching for Della to bring him his dinner. It was never much, but he knew that Della snuck more to him than his step-mother sent. The second sun was slipping below the trees, throwing the clearing into shadows, when the cottage door opened and Della stepped out. She hurried toward him, a breath of color in the grey dusk, hugging a small basket close to her body.

“Elvin? Where are you?” Her whisper was soft and gentle and Elvin realized he was hidden by the shadow of the stable. He stepped out slowly and walked toward the girl.

Turning in his direction she continued to the wood pile, where they always met for dinner. Della handed the basket to Elvin and then perched on a large tree stump. She was only a year younger than Elvin, who would be fifteen in a few months, and the only reason Elvin had not run away from home. As he took the basket from her, he wished the suns were still up so he could see her better. Her long brown hair blended in with the coming darkness, but in the daylight the coppery shine fascinated him. Her eyes were a soft brown, almost amber, reminding him of honey and sweetness.

“Della, I found something new today.” Elvin removed the cloth from the basket and found half a boiled potato, a small piece of venison, and a soft roll. He knew that Della had eaten his hard roll and replaced it with her soft one. A lump threatened to close his throat, but he ignored it.

“What? When can I see it?” She clasped her hands together and leaned toward him.

“It is a secret for now, but I will show it to you soon. First I have to find a way to bring it down the mountain.” The hunger gnawed at him, and as his stomach grumbled in anticipation, Elvin bit into the meat. His step-mother might be stingy, but the juicy meat was a testimony of her cooking skills.

“No,” Elvin quickly swallowed the last bite of meat. “but it is in a crevice and I can not carry it and climb back out.” He started on the potato.

“Wait here!” Jumping up, Della ran back to the cottage and disappeared inside. While she was gone, Elvin ate his roll slowly, savoring each bite of Della’s kindness.

Why am I posting this? Even though it still needs work, I wanted to show my process. The first sentence is 100% telling, and not very informative telling at that. My current draft is almost more of an outline than writing. Now that the plot is all down, I need to flesh it out. Build some characters, setting and emotional depth. This scene is FAR from being complete or even close to where I want it, but I find that I do better when I work in small chunks. (I'll hopefully finish the scene tonight when the kids are in bed.)

I wish I had at least four hours a day to hide in an office with a closed door to write, but I don't.

Why did I decid to elaborate on that first sentence? I want my readers to get to know Elvin, where he lives, what life is like for him, how he sees things, what he feels in his situation, etc. So, let's look at him in an every day situation--eating dinner. The scene is closer to showing you that he is not allowed inside the house than the original sentence (still needs work, I know, and the rest of the scene will make it clearer). Later, we will go to his room, the loft above the stable, and take a look at his meager belongings--giving yet more insight to his life.

The point is I am trying to show you what his life is like without telling you that his step mother hates him, his father ignores him, he is a hired hand not a son, he loves Della because she is the only one kind to him. I could tell you all those things and make a decent story out of it, but if I work a little harder to pull you into Elvin's world, make you feel what he feels, then you will begin to care what happens to him.

The other reason I shared today's work? One revision of your draft is not going to make your novel ready for the publisher. Plain and simple.
Posted by Charity Bradford at 12:44 PM